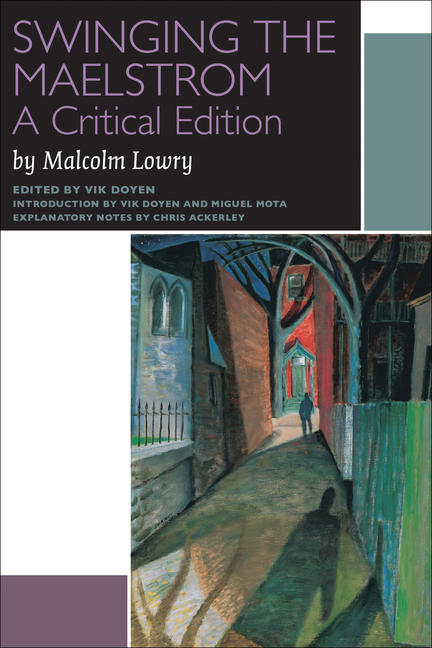 Swinging the Maelstrom is the story of a musician enduring existence in the Bellevue psychiatric hospital in New York. Written during his happiest and most fruitful years, this novella reveals the deep healing influence that the idyllic retreat at Dollarton had on Lowry. This long-overdue scholarly edition will allow scholars to engage in a genetic study of the text and reconstruct, step by step, the creative process that developed from a rather pessimistic and misanthropic vision of the world as a madhouse (The Last Address, 1936), via the apocalyptic metaphors of a world on the brink of Armageddon (The Last Address, 1939), to a world that, in spite of all its troubles, leaves room for self-irony and humanistic concern (Swinging the Maelstrom,1942–1944).
- This book is published in English.

Malcolm Lowry was born in 1909 in northwest England, near Liverpool. During the 1930s he lived in London, New York, Mexico, and Los Angeles before moving to British Columbia in 1939. This move marked the start of a startlingly fertile period in Lowry’s career as a 20th-century literary modernist. The 1940 Under the Volcano formed the basis for his masterpiece, Under the Volcano (1947)—one of the last great modernist novels.

Vik Doyen studied at the University of Pennsylvania and did archival research in the Malcolm Lowry Collection at UBC for his doctoral dissertation Fighting the Albatross of Self : A Genetic Study of the Literary Work of Malcolm Lowry (Katholieke Universiteit te Leuven, 1973). He also presented several papers on Lowry at international conferences.

Miguel Mota is Associate Professor of English at the University of British Columbia in Vancouver. In addition to his work on Lowry, Mota has published in the areas of contemporary British literature and culture and on the relationship between literature and film, including articles on Jeanette Winterson, John King, Mike Leigh, Derek Jarman, and Peter Greenaway, among others.

Chris Ackerley's research area is modernism and his speciality is annotation, especially of the writings of Malcolm Lowry and Samuel Beckett. His first book (with Lawrence J. Clipper), A Companion to Malcolm Lowry’s Under the Volcano (UBC Press, 1984), has become a standard reference.

Patrick A. McCarthy is the author or editor of 11 books or monographs, over 50 scholarly articles and numerous reference articles and reviews. His principal publications on Malcolm Lowry include Forests of Symbols: World, Text, and Self in Malcolm Lowry’s Fiction (University of Georgia Press, 1994); Malcolm Lowry’s “La Mordida”: A Scholarly Edition (University of Georgia Press, 1996); and “Under the Volcano,” in The Literary Encyclopedia.

Paul Tiessen is the founding editor of the Malcolm Lowry Newsletter (1977–1984) and The Malcolm Lowry Review (1984–2002). Besides scholarly articles and chapters in books on the work of Malcolm Lowry, Tiessen wrote the Introduction for Malcolm Lowry and Margerie Bonner Lowry’s Notes on a Screenplay for F. Scott Fitzgerald’s Tender Is the Night (Bruccoli Clark, 1976).

Other titles by Malcolm Lowry

Other titles by Vik Doyen

Other titles by Miguel Mota

Other titles by Chris Ackerley

Other titles by Patrick A. McCarthy

Other titles by Paul Tiessen