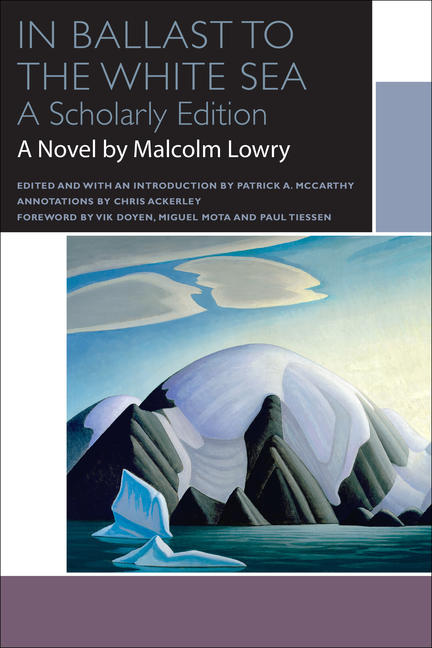 In Ballast to the White Sea is Malcolm Lowry’s most ambitious work of the mid-1930s. Inspired by his life experience, the novel recounts the story of a Cambridge undergraduate who aspires to be a writer but has come to believe that both his book and, in a sense, his life have already been “written.” After a fire broke out in Lowry’s squatter’s shack, all that remained of In Ballast to the White Sea were a few sheets of paper. Only decades after Lowry’s death did it become known that his first wife, Jan Gabrial, still had a typescript. This scholarly edition presents, for the first time, the once-lost novel. Patrick McCarthy’s critical introduction offers insight into Lowry’s sense of himself while Chris Ackerley’s extensive annotations provide important information about Lowry’s life and art in an edition that will captivate readers and scholars alike.

Malcolm Lowry was born in 1909 in northwest England, near Liverpool. During the 1930s he lived in London, New York, Mexico, and Los Angeles before moving to British Columbia in 1939. This move marked the start of a startlingly fertile period in Lowry’s career as a 20th-century literary modernist. The 1940 Under the Volcano formed the basis for his masterpiece, Under the Volcano (1947)—one of the last great modernist novels.

Patrick A. McCarthy is the author or editor of 11 books or monographs, over 50 scholarly articles and numerous reference articles and reviews. His principal publications on Malcolm Lowry include Forests of Symbols: World, Text, and Self in Malcolm Lowry’s Fiction (University of Georgia Press, 1994); Malcolm Lowry’s “La Mordida”: A Scholarly Edition (University of Georgia Press, 1996); and “Under the Volcano,” in The Literary Encyclopedia.

Chris Ackerley's research area is modernism and his speciality is annotation, especially of the writings of Malcolm Lowry and Samuel Beckett. His first book (with Lawrence J. Clipper), A Companion to Malcolm Lowry’s Under the Volcano (UBC Press, 1984), has become a standard reference.

Vik Doyen studied at the University of Pennsylvania and did archival research in the Malcolm Lowry Collection at UBC for his doctoral dissertation Fighting the Albatross of Self : A Genetic Study of the Literary Work of Malcolm Lowry (Katholieke Universiteit te Leuven, 1973). He also presented several papers on Lowry at international conferences.

Miguel Mota is Associate Professor of English at the University of British Columbia in Vancouver. In addition to his work on Lowry, Mota has published in the areas of contemporary British literature and culture and on the relationship between literature and film, including articles on Jeanette Winterson, John King, Mike Leigh, Derek Jarman, and Peter Greenaway, among others.

Paul Tiessen is the founding editor of the Malcolm Lowry Newsletter (1977–1984) and The Malcolm Lowry Review (1984–2002). Besides scholarly articles and chapters in books on the work of Malcolm Lowry, Tiessen wrote the Introduction for Malcolm Lowry and Margerie Bonner Lowry’s Notes on a Screenplay for F. Scott Fitzgerald’s Tender Is the Night (Bruccoli Clark, 1976).

“In recent years, Canadian modernist literature has been the subject of wide-ranging recovery projects like Editing Modernism in Canada and the Canadian Writing and Research Collaboratory, many of which have been facilitated by digital platforms. Part of the Canada and the Spanish Civil War sub-series of the University of Ottawa Press’s Canadian Literature Collection, Best Stories is the second literary work brought out in print as part of spanishcivilwar.ca, a more holistic digital archival recovery platform. In addition to the context of Canadian modernist recovery projects, Sharpe’s collection engages in the global recovery of leftist literature. (...) Among Sharpe’s most skillful critical moves is a series of readings that contravene book reviews Garner’s self-construction. By evaluating Garner’s self-fashioning as one of the many texts that constitute Garner’s cultural impact, Sharpe allows the persona and the oeuvre to mutually inform one another. (...) Sharpe suggests that this repetition across fictional and nonfictional forms imbues the writing with a realism based on the intertextuality within Garner’s written works, particularly in the case of the Spanish Civil War stories. The explanatory notes for the three stories on the Spanish Civil War are some of the most extensive in the collection, speaking to the richness of the stories’ historical context and to the linguistic, cultural, and international experience of the combatants they portray. (...) Sharpe’s edition provides a tidy, if implicit, parallel to Garner’s collection. Sharpe’s edition fits into broader digital and print publications, draws together multiple critical contexts, and features a writer whose work appeared primarily in Canadian venues. Thanks to Sharpe’s editorial treatment, Garner’s “multimedia production” across print, film, and radio spans outwards from the print instance of the stories; the multiplicity of international, Canadian, classed, gendered, and radicalized contexts emerge as networked connections across Garner’s short fiction. The connections of Canadian literary production and archival recovery to their international contexts come to light.” – Emily Christina Murphy, Queen's University, Modernism/Modernity

“Under the Volcano follow-up In Ballast to the White Sea typed up from copy after manuscript was burned in a fire…The book was launched this weekend at The Bluecoat arts centre in Liverpool. Artistic director Bryan Biggs said it “provides the missing link between Lowry’s first, somewhat immature novel, Ultramarine, written while he was still a student, and his acknowledged masterpiece, Under the Volcano.” – Alison Flood, “ ‘Lost’ Malcolm Lowry novel published for the first time,” The Guardian, October 26, 2014 Also articles in the UK News (October 29, 2014), LA Times (October 30, 2014); NPR (October 30, 2014);

“What does In Ballast have that you don’t get elsewhere in Lowry? There is more dense, original, expressive writing, those primary transcriptions of reality that Lowry always – when he allowed himself – shone at. (…) Gorgeous, rhapsodic sentences, many of them turning on placenames (…) a kindly ability to incorporate impressions, references, knowledge (…) A shift of focus to things that were never central in any of Lowry’s previously published books (…) a masterpiece of doleful sports writing” – Michael Hofmann, “Set up and put off,” The Times Literary Supplement, April 15, 2015

Other titles by Malcolm Lowry

Other titles by Patrick A. McCarthy

Other titles by Chris Ackerley

Other titles by Vik Doyen

Other titles by Miguel Mota

Other titles by Paul Tiessen