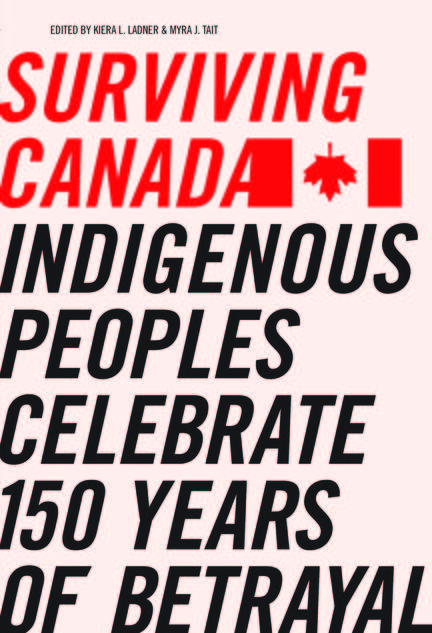 Surviving Canada: Indigenous Peoples Celebrate 150 Years of Betrayal is a collection of elegant, thoughtful, and powerful reflections about Indigenous Peoples' complicated, and often frustrating, relationship with Canada, and how--even 150 years after Confederation--the fight for recognition of their treaty and Aboriginal rights continues.

Myra J. Tait is a member of Berens River First Nation and mother of four children. She has a law degree from the University of Manitoba and is a Master's student in law. Myra has done field research in New Zealand and Australia with the Comparative Indigenous Constitutional Politics Project at Mamawipawin.

Kiera L. Ladner is an Associate Professor and Canada Research Chair in Indigenous Politics and Governance in the Department of Political Studies at the University of Manitoba. She received her PhD from Carleton University in 2001. Alongside Leanne Simpson, she held a position at Trent from 2000- 2002. She is a leading scholar in the field of Indigenous politics and is widely published in Canada, Australia, the United States and Mexico.

Published to coincide with celebrations of the 150th anniversary of Canadian confederation, this insightful compendium of largely Indigenous voices challenges all Canadians to improve relations with and conditions for the continents First Nations Peoples. Poems, essays, interviews, song lyrics, and illustrations bring razor-sharp clarity to historic and contemporary issues, including the shameful history of residential schools, current reconciliation efforts, conflicts over resource development, and how best to confront legacies of racism and colonialism. The editors' aim to provide an accessible educational tool is well-served by coverage of diverse topics, including over-representation of Indigenious people in prison, land dispossession, and how social amnesia prevents progress. Equally impressive is the recovery of repressed histories, such as First Nation women's suffrage struggles, how the city of Winnipeg was built with stolen water, and the critical battle to preserve language rights. Contributors including the late actor Chief Dan George, singer-songwriter Buffy Saint-Marie, and a number of writers and activists, such as Erica Violet Lee and Helen Knott share feelings of anger and disappointment at past and ongoing injustices, as well as an incredible hope that insistent resilience that has marked Indigenous exsistence in Canada will help spark a new awakening for all Canadians. - Publishers Weekly

Other titles by Kiera Ladner

This is an Honour Song

Twenty Years Since the Blockades