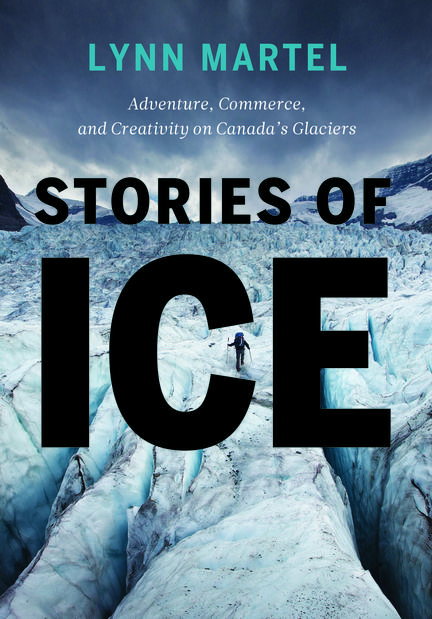 With the state of global ice constantly in the news, one mountain journalist examines Canadian glaciers to uncover their secrets and their future.

Author Lynn Martel is one of them. With gorgeous images by some of the country’s best outdoor photographers, Stories of Ice shares the excitement, the mystery, and the wonder of Canada’s glaciers and poses questions about their future.

Lynn Martel grew up in Montreal and studied creative writing at Concordia University. Since the 1980s she has lived in the Canadian Rockies, where she writes about mountain adventure, culture, science, history, and personalities. Her work has appeared in numerous newspapers and magazines, including the Rocky Mountain Outlook, Explore, Gripped, Canadian Rockies Annual, Jasper Fitzhugh, Whistler Pique and Calgary Herald. She is the author of three books published by RMB: Expedition to the Edge: Stories of Worldwide Adventure, Tales & Trails: Adventures for Everyone in the Canadian Rockies, and Stories of Ice: Adventure, Commerce and Creativity on Canada’s Glaciers. Lynn lives in Canmore, Alberta.

"From snow spiders to rock flour, from the Illecillewaet to the Chaba, Lynn Martel has crafted an impressive volume, taking the reader on a personal journey onto and into the fascinating world of ice." —Bernadette McDonald, author of Art of Freedom, Alpine Warriors, Freedom Climbers and Keeper of the Mountains

"Lynn Martel loves glaciers and you should too! Stories of Ice is an engaging and meticulously researched look at the adventure, science and inspiration of glaciers. As the last vestiges of an undisturbed landscape that covered our entire continent, glaciers are a barometer of our relationship with the Earth, and Martel asks, What are glaciers telling us? Their disappearance is the visible face of climate change and Martel concludes with a stirring and positive call to action."—John Baldwin, co-author of Soul of Wilderness (with Linda Bily)

"Lynn Martel has produced an exhaustively researched, lovingly crafted and beautifully written body of work about our relationships with living ice, drawing from the adventures and experiences of explorers, climbers, scientists and others. —Kevin Van Tighem, author of Heart Waters, Our Place, The Homeward Wolf and Bears: Without Fear

"This is a definitive work about living ice and the human lives it touches. Its timing is important; by the end of this century the glaciers she describes may well be gone. But such is the passion and power of this work that it might even help save those glaciers by mobilizing action to defend them from the climate changes that put their future—and ours—in doubt." —Kevin Van Tighem, author of Heart Waters, Our Place, The Homeward Wolf and Bears: Without Fear

"While I admire the concept of stories shaped around the ephemeral aspect of ice, I'm particularly taken by Lynn's insights into the affinity shared for Jumbo Glacier in the central Purcells by the Indigenous Ktunaxa Nation and the Alpine Club of Canada's first official photographer, Byron Harmon. A century ago Harmon was inspired to capture the spiritually uplifting vista of Jumbo Glacier. And for the Ktunaxa, its sacred glacial meltwater has nourished their nature-based belief system since the beginning of time." —Pat Morrow, author of Looking for Tao Canyon, Footsteps in the Clouds and Beyond Everest

"Lynn Martel's Stories of Ice is a fascinating and eclectic mix of tales about multiple aspects of glaciers: artistic, scientific, economic, recreational, touristic, historical and even spiritual. Here in Canada we are richly endowed with glacial ice, but unfortunately it is disappearing quickly. This personal and informative book is a must read for anyone interested in the effects of climate change." —Chic Scott, author of Pushing the Limits, Powder Pioneers, Deep Powder and Steep Rock and numerous others

"Most of us think of glaciers as frozen wastelands, but Lynn Martel's well-crafted stories and pages of stunning photographs unfreeze their secrets with warm humour, sharp wit and a lifetime of personal experience."—Will Gadd, adventure athlete and professional guide

"No glacier will ever look the same to you after you've read this book, nor should it—the hard blue ice of Canada's glaciers is a measure of our planet's health and our human relationship to it. If you're going to read just one book about glaciers, this should be it; but Stories of Ice may ignite a hot interest in all things frozen." —Will Gadd, adventure athlete and professional guide

"Martel's writing both glows with and is informed by her love for Canada's glaciers. Through intricate storytelling and thorough research, this book provides all we need to know about what is happening to, and in some instances being done to, these Canadian ecological treasures." —Dahr Jamail, author of The End of Ice: Bearing Witness and Finding Meaning in the Path of Climate Disruption

"Martel's intimate relationship with these glaciers over time is an example for all of us to follow, reminding us to love, care for and serve these sacred areas while they are still with us." —Dahr Jamail, author of The End of Ice: Bearing Witness and Finding Meaning in the Path of Climate Disruption

"This fine book is a masterwork, an amazing marriage of experience and craft that can only emerge from a lifetime of hard-won competence and years of covering and reporting on every aspect of science, art and adventure across the vast geography of the entire mountain West." —Robert William Sandford, author of Our Vanishing Glaciers: The Snows of Yesteryear and the Future Climate of the Mountain West

"As these words and pictures attest, Canada's western glaciers are one of the world's great treasures—and now our job is to build a world where they can last for many millennia to come." —Bill McKibben, author of Falter: Has the Human Game Begun to Play Itself Out?

Other titles by Lynn Martel

Adventures for Everyone in the Canadian Rockies

Expedition to the Edge