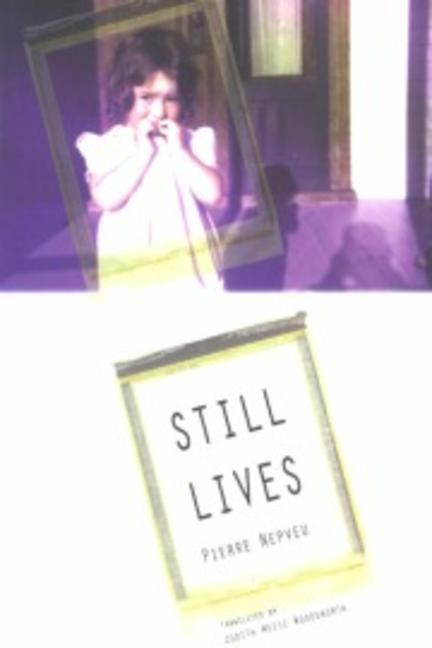 Jerome lives alone. Twenty years ago, time stopped and reality slipped from his life. His days are differentiated only by the photos he takes—one for each day of the year—and puts up on his wall as his own personal calendar. But one day Jerome receives a letter from his daughter Lea from whom he was separated when she was an infant. Lea's mother, Arlette, had come to Montreal to work in the French pavilion at Expo 67, where she met the young photographer Jerome. After the birth of their daughter, the relationship soured and Arlette returned to France with the child. Jerome's desperate attempts to find them were unsuccessful. He left France in despair and has never known what became of them. When Jerome and Lea finally meet, it is in the midst of a thunderstorm that mirrors the turbulence awaiting in their own relationship.

Pierre Nepveuis a Montreal critic, essayist, poet and teacher. He has received the Governor General’s Award three times—in 1997 for the collection of poems Romans-fleuves, in 1998 for the essay Intérieurs du Nouveau Monde, and in 2003 for Lignes Aériennes. His many other awards include the Québec-Paris Prize, the Prix Victor-Barbeau de l’Académie des lettres du Québec, and the Canada-Swiss Prize. Pierre Nepveu has taught in the Département d’études françaises at the Université de Montréal since 1978.

Donald Winkler is a filmmaker and translator. He won the Governor General’s Literary Award for Translation and has been a finalist four times. His translation of Daniel Poliquin’s La Kermesse [A Secret Between Us] was a finalist for the 2007 Giller Prize. He lives in Montreal, Quebec.
Writer, playwright, director, actor, journalist, historian, and critic, Jean-Claude Germain is a Quebec icon. He taught at the National Theatre School of Canada and was artistic director of Théâtre d’aujourd’hui (1972-1982). Well-known for his story telling on the radio, he related the year-by-year saga of the history of Montreal from 1642 to 1992 at the morning show CBF-Bonjour, the 350 episodes were ultimately published in three volumes as Le Feuilleton de Montréal/i>.

Judith Weisz Woodsworth is Professor of Translation Studies in the Département d’études françaises at Concordia University. She has published widely on the history and theory of translation and has translated novels by Quebec authors Pierre Nepveu and Abla Farhoud.

He began to roam the streets in his spare time. He gathered images of ordinary life from here and there. He captured human faces, smiles, sad expressions and children at play. He began to experience the faintest of pleasures, which he immediately disparaged by reminding himself how ordinary his photos were. He imagined the millions of images which others before him had produced and which they were still producing at that very moment, the world over: thousands of shots of the Eiffel Tower, or Niagara Falls, or smiling families, or children, all looking more or less the same, all frozen in the same idiotic mirror held up throughout the days and years. What a waste of time. But he continued, because he intensely needed to preserve something of his slow descent into darkness. Yet he knew full well that once he reached bottom he would no longer have the eyes to see. Once he achieved complete absence he would no longer be in a position to cast a backward glance at the fine spectacle of his decline. In any case, he thought, these images would remain foreign to him. Their main advantage was that they revealed nothing about himself.

One day, on one of those rare days when he found himself inclined to postpone the fatal deadline, when the faint glimmer of pleasure outweighed all the rest, he allowed his hobby to provide him with a means of escape. He was guided to the offices of a newspaper which had run an ad (one of the only things he still read, apart from a few magazines, and the odd page of a book opened at random, in the middle). There, almost miraculously, he landed a job as a photographer.

He began at the low end of the totem pole, spending most of his time capturing the same banal scenes over and over again: the door of a factory from which workers had just been laid off, a student demonstration, the front of a bank after a hold-up, one street where they were burying electrical cables and another one where trucks drove back and forth, day in and day out, keeping local residents awake at night. The trucks were piled high with huge stones that were being dumped in the river to make an island, they said.

He always covered short-lived stories, until he was assigned to the World's Fair that was being assembled in the middle of the river. Through no fault of this own, this severely retarded his irreversible decline and profound torpor. He had to live, at least through one chilly spring and a summer swollen with storms, while waiting for the last snows to fall, while awaiting the final, majestic white storm that marks the end of human existence.

And so, images unfurled that year. The pavilions of Expo were erected almost overnight. Events occurred at such a rhythm that he seemed never to have enough eyes or cameras to see everything, to pinpoint everything, to record everything. He worked doggedly, like a beast of burden, throughout that unforgettable spring. And, at the same time, he blundered into a romance—incredible for someone who had no heart or who had kept it to himself, carefully locked up at that, because you need a healthy heart, all your own, in order to escape fully, in order to grow smaller and disappear without a trace.

He had never had a woman in his life before, except in his dreams. That spring, against his better judgment, in breach of the pitiful contract he seemed to have signed with his unlucky star (but then wasn't he destined to be a cheater, a traitor?), he let a woman come into his life. She came from elsewhere, from afar. She came into what was left of his life, and he never quite got over it. He was left with burning scars and, later, a chilly memory.

“ The novel reads beautifully, with an eloquence that allows readers to exit it both lost and found. It is the tale of one lonely man among lonely millions who admits he 'was not destined for great things. He was not born under one of those lucky stars that confer opulent lives and glorious deaths on men.' Perhaps not. But under Nepveu's dextrous hand, the life of this anti-hero shimmers with grimly beautiful intensity.”

Other titles by Pierre Nepveu

Other titles by Judith Weisz Woodsworth

History of the Jews in Quebec