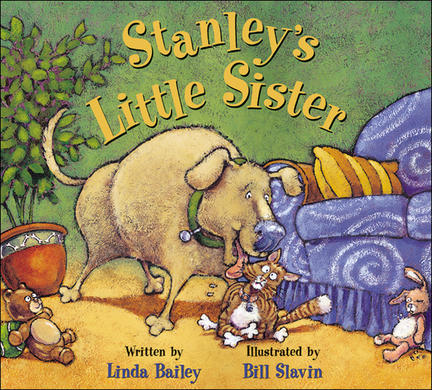 Stanley's home life goes awry when he suddenly finds himself with a new, feline “sister.” Making friends with this perplexing creature is not easy. Stanley's big, friendly sniff is met with an abrupt THWACK! from the cat's paw. “ROWP!” yelps Stanley. No fair!

Even less fair is the way his people blame him for causing trouble when all he's trying to do is make friends! Is it Stanley's fault the cat doesn't understand dog talk? Given time and a bit of mutual understanding, can peace and purring reign in Stanley's house?

Young readers familiar with the “dog's eye view” of Stanley and his world will rejoice at the addition of Fluffy the cat.

This story would be enjoyable for storytime as a stand-alone, but also would make a nice lead in for discussions about getting along with others.—School Library Journal

Bill Slavin's textured acrylics saturate the pages and breathe life into Stanley and his sidekicks, creating a canine - and now partly feline - world of mayhem and fun.—Quill & Quire

Stanley knew he wasn’t supposed to chase the cat, but who invited her to live here anyway? Not Stanley! But knowing he’s supposed to be a good dog Stanley tries to be friendly. He even seeks advice from his friends at the dog park, but nothing works. Will this cat ever warm up to Stanley?