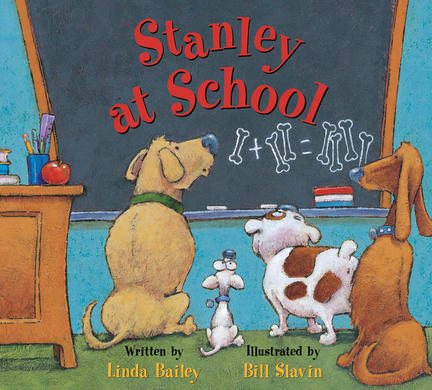 Every day, Stanley the dog watched all the children in his neighborhood walk down his street and into their school, where they stayed until the afternoon. And every day he got more and more curious. “What did the kids do in that school all day?” His dog friends at the park didn't know any more than he did. So they decided to find out, and together they made their way to the bottom of the stairs in front of the school. “And that's when Stanley got an idea. A big idea. A bold idea! An idea so daring, it made his fur stand up. 'Why don't we go inside?' he said.” What could be more fun than four dogs running loose in an elementary school? Not much. Until they get caught, that is!

Small children love stories about things in their world getting turned upside down, and this story delivers in a big way. This sixth book in the bestselling series from the multi-award-winning team of Linda Bailey and Bill Slavin will have children roaring with delight, as the dogs are shown in hilarious detail making their way through lunch boxes, chasing basketballs and upending instruments and paint jars before eventually getting marched out by the principal (the “top dog” at the school). This book is a natural for a lively read-aloud, but it could also spark a discussion about seeing things from another's point of view, in this case a dog's.

Bill Slavin's illustrations are colourful and continue the style readers will expect from previous titles in the series.—CM Magazine

This dog's-eye view of a day at school will leave readers laughing with delight ... Stanley fans will enjoy the latest escapade in the series.—School Library Journal

Slavin's illustrations are a delight ...[readers] are sure to laugh at the dogs' adventures.—Kirkus Reviews

Back to School Books from Preschool to University

Back to School Books from Preschool to University

Books for little kids and big ones, and everyone in between. We run the academic gamut of back to school titles.