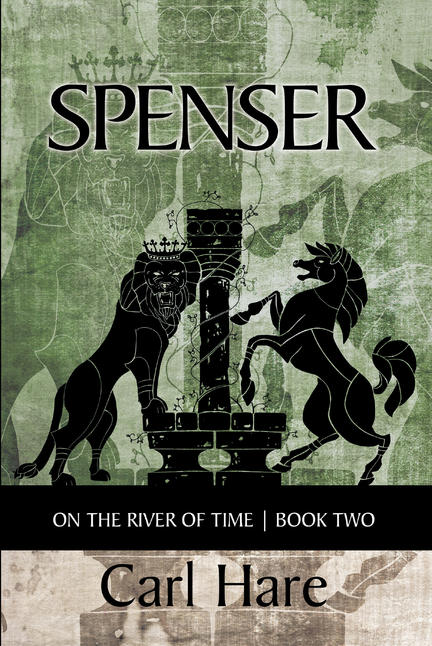 Spenser portrays the last four turbulent months of Edmund Spenser’s life as he and his family are caught up in the Munster Revolt in Ireland in 1598. As he fights to survive the invasion of his home, his life as a refugee in Cork, and his return to England, his memories and thoughts trace through the sweep of his life, he continues to work on the last book of The Fairie Queene, and a treatise he writes about the Irish rebellions turns out to have far-reaching consequences.

Written in the form of his own Spenserian stanzas, Spenser evokes the sense of the Elizabethan Period and is Book Two of the epic trilogy On the River of Time, taking us to the second time-period of the three thousand years spanned in the trilogy and the second figure of the three—Odysseus, the mythical hero, in ancient Greece; Spenser, the poet, in Ireland, and Archer, the fictional renegade actor/director in present-day Canada.

Through their journeys and struggles we explore the nature of human perceptions and drives, our use of the Mask in our lives, encounters with the Other, acceptance or denial of the consequences of our actions, and the continuity over the millennia of the universal human attributes.

Carl Hare in his long career has been a professor, actor, director, playwright, and poet. From the University of Alberta he won the Rutherford Gold Medal in English and later received an MA; he also has a Diploma in Acting from the Royal Academy of Dramatic Art in London. He founded the University of Victoria's Theatre Department, was the Artistic Director of Company One Theatre, taught at the National Theatre School in Montreal, and was Chairman of the Drama Department at the University of Alberta. For the Canada Council he was the first Chair of the BC/Yukon Division of the Explorations Program. He served on the Board of the Dominion Drama Festival, and was a BC member of the Canadian Conference of the Arts and one of the founders of the National Screen Institute - Canada. In 2012 he won the Sterling Award for Outstanding Contribution to Theatre in Edmonton. His most recent work includes performances of his play The Eagle and the Tiger and his adaptation of Ibsen's John Gabriel Borkman; the setting of six of his children's poems to music by Canadian composer Malcolm Forsyth; a commissioned poem for Forsyth's A Ballad of Canada, performed by the National Arts Centre Orchestra; and A Weathering of Years, a collection of poetry published in 2015.

Other titles by Carl Hare

On the River of Time

A Weathering of Years