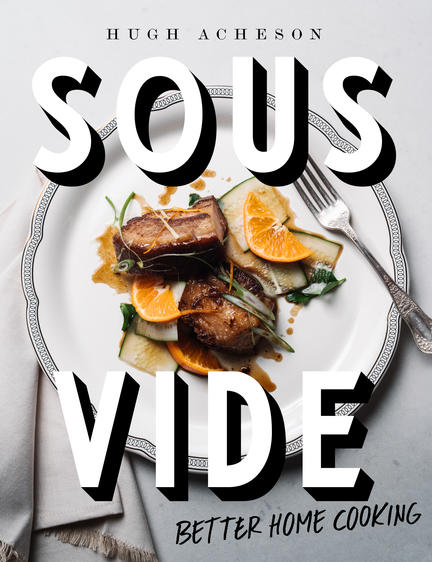 Just as Hugh Acheson brought a chef's mind to the slow cooker in The Chef and the Slow Cooker, so he brings a home cook's perspective to sous vide, with 90 recipes that demystify the technology for readers and unlock all of its potential.

NAMED ONE OF FALL'S BEST COOKBOOKS BY FOOD & WINE

Whether he’s working with fire and a pan, your grandpa’s slow cooker, or a cutting-edge sous vide setup, Hugh Acheson wants to make your cooking life easier, more fun, and more delicious. And while cooking sous vide—a method where food is sealed in plastic bags or glass jars, then cooked in a precise, temperature-controlled water bath—used to be for chefs in high-end restaurants, Hugh is here to help home cooks bring this rather friendly piece of technology into their kitchens.

The beauty of sous vide is its ease and consistency—it can cook a steak medium-rare, or a piece of fish to tender, just-doneness every single time . . . and hold it there until you're ready to eat, whether dinner is in ten minutes or eight hours away. But to unlock the method’s creative secrets, Hugh shows you how to get the best sear on that steak after it comes out of the bath, demonstrates which dishes play best with extra-long, extra-slow cooking, and opens up the whole world of vegetables to a technology most known for cooking meat and fish.

“High-end cooking comes to the home kitchen in this fun, clear approach to a gourmet technique. . . . [Hugh] Acheson writes with such charm that he can make warm water interesting.”—Publishers Weekly

HUGH ACHESON is the chef/partner of the restuarants Five & Ten, The National, and Empire State South, named restaurant of the year by Atlanta magazine. He is winner of two 2011 James Beard Awards for Best Chef Southeast and Best American Cookbook, has been featured in numerous food and wine publications, and appears on Bravo's Top Chef as a judge. Hugh is the author of The Broad Fork, A New Turn in the South, Pick a Pickle, and The Chef and the Slow Cooker. He lives in Athens, Georgia.

I have been cooking professionally since I was sixteen years old. The past rewarding yet arduous thirty-one years of learning the nuances of food and watching over countless braises, reductions, roasts, and poaches were anchored in teachings that have been culinary bible verse for hundreds of years. Apart from some useful gadgets that have come along, and, I guess, gas and electricity, my cooking techniques are much the same as one would have found in a professional kitchen in France 150 years ago. That timeless foundation has served me well, and changes in food developed at a tectonic pace, at least until fifteen years or so ago.

One of the biggest changes was that “sous vide” became a productive and popular technique for cooking. I remember seeing the cooks in my kitchens starting to use the technology, immersing themselves in the parameters and advantages of cooking food, sealed in bags, in a precisely temperaturecontrolled water bath. That has never sounded romantic. But the results were impressive, and I was equally impressed with these younger chefs, maybe five to ten years my junior, the first phalanx of a generation who have completely changed the world of food. Watching them learn new techniques has been a wonder; I still look in admiration, and sometimes I feel like the old curmudgeon: “We used to have to cook hundreds of steaks to finally know how to get it medium-rare every single time! Kids these days can just put it in a bag? Oh, and I had to walk miles in the snow to get to my fifteen-hour work shift!”

I jest, but some of that is true, save for the walk to work. I usually took the bus. I guess I am just trying to show you how much cooking really has changed in recent years. Technology has completely altered the way we move and act in the kitchen, re-choreographing the dance of line cooking, with the new moves allowing us to precisely achieve temperatures that were a guessing game before. Steam ovens, tilt skillets, induction burners, Cryovac machines and immersion circulators have us culinarily dancing to a different tune.

When sous vide cooking equipment became available to restaurants through a company called PolyScience, the circulators looked like they had been pulled from a steampunk science lab, and, well, they pretty much had been. They initially cost $1,000, and fine dining bought in—hook, line, and sinker—because chefs have a universal yearning to find new ways to produce dishes.

What sous vide did for restaurants was speed up the final execution of food by having much of the food cooked and ready for reheating or a quick sear before service. It guaranteed consistency through accurate cooking temperatures, and reduced food waste through shrinkage during the cooking process. But the sous vide method also had a huge impact on taste. When you learn how to cook a piece of meat or fish (or anything else) in a water bath, understanding the perfect temperature at which the flesh will set up and be cooked but still retain moisture and flavor, you really change how customers eat and how chefs work. For those chefs taking notes on times and temps and homing in on the exact doneness and texture and flavor of the food they were cooking, sous vide was a game changer.

The technology is actually pretty basic when it comes to sous vide, and many thermal circulators have come onto the market. These are essentially thermostat-controlled heating devices with a motor that moves the water around at the precise desired temperature. That’s it. But, as with many advances in technology, it takes a while for each new gadget to become commonly available, and I can say this with good experience: My dear father was one of the first people to buy the first IBM home computer, which boasted the processing power of today’s toasters for about $20,000. Simple economics shows that more competition drives down prices, and when combined with advances partly in production and partly in technology—well, the price of the circulators is now pretty universally around the $100 to $200 range, and lots of models are available for under $100. You can spend more for commercially robust versions, but the inexpensive ones will get the job done, with aplomb, in a home kitchen.

With so many gadgets, electric pots, fancy ovens, and fridges with Wi-Fi connections, why do you need a sous vide setup in today’s world? Well, that is a good question. Although ostensibly a tech gadget, the sous vide circulator is truly a great way to nail old-school cooking. It is a way to efficiently and cleanly make you a better cook, and the often long cook times give you the same freedom that the slow cooker does: the power to walk away from the kitchen and return hours later to a nourishing from-scratch meal.

In fact, sous vide takes that convenience even further: A steak at 129°F is a medium-rare steak, so it can sit in a 129°F water bath for hours and stay a medium-rare steak. You can go run some errands, come back, take a shower, and get that dinner on the table whenever you feel like it. (Okay, okay, technically the steak can’t last forever at that temperature—it will continue to keep cooking and get mushy-soft if you leave it in there all day—but for most intents and purposes, sous vide will serve to hold your food hot for as long as you need it to.)

And it’s not just convenience and precision. There are so many things that you can make—or make better—with sous vide cooking. It opens up new doors for culinary pursuits.

In this book, I share recipes that show some of my favorite characteristics of this method of cooking. I walk you through the basic techniques, and the recipes highlight a whole host of ways sous vide can make your cooking easier, more convenient, and more delicious. It might seem that it’s from the future, but really, it’s part of the lineage that connects us to the days when humans first discovered cooking. It’s a way to get us cooking more, at home, for the people around us.

“In Sous Vide, chef Hugh Acheson makes an airtight case for the convenience and consistency of a method once limited to restaurant kitchens. . . . These delicious fall recipes [are] a great place to start.”—The Wall Street Journal

“High-end cooking comes to the home kitchen in this fun, clear approach to a gourmet technique . . . Acheson writes with such charm that he can make warm water interesting—an invaluable trait for this survey of sous vide recipes and methods.”—Publishers Weekly

“Sous Vide: Better Home Cooking praises the [sous vide] technique for its consistency, safety, and mess-free qualities, and offers a collection of recipes that will allow even skeptics to see its potential.”—Garden & Gun

“If you’ve been meaning to try [sous vide], this book is the perfect place to finally start.”—Chowhound