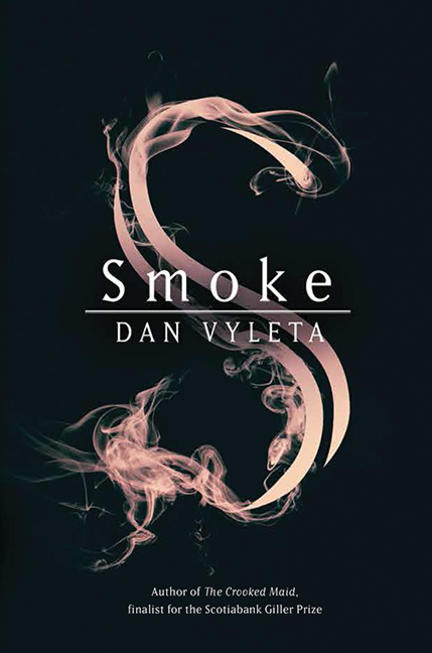 “Dan Vyleta has conjured a rich and surprising counter-history, an England saturated with a substance so potent and evocative it vaults instantly into the pantheon that includes the dust of Philip Pullman, the soma of George Orwell and the opium of Amitav Ghosh. Smoke is enthralling.” —Robin Sloan, bestselling author of Mr. Penumbra’s 24-Hour Bookstore

England. A century ago, give or take a few years. An England where people who are wicked in thought or deed are marked by the Smoke that pours forth from their bodies, a sign of their fallen state. The aristocracy do not smoke, proof of their virtue and right to rule, while the lower classes are drenched in sin and soot. An England utterly strange and utterly real.

An elite boarding school where the sons of the wealthy are groomed to take power as their birthright. Teachers with mysterious ties to warring political factions at the highest levels of government. Three young people who learn that everything they’ve been taught is a lie—knowledge that could cost them their lives. A grand estate where secrets lurk in attic rooms and hidden laboratories. Young love, or lust, turning to guilt. A desperate chase. Revolutionaries and secret police. Religious fanatics and cold-hearted scientists. Murder. A London filled with danger and wonder. A tortured relationship between a mother and a daughter, and a mother and a son. Unexpected villains and unexpected heroes. Cool reason versus passion. Rich versus poor. Right versus wrong, though which is which is far from clear.

This is the world of Smoke, a narrative tour de force, a tale of Dickensian intricacy and ferocious imaginative power, richly atmospheric and intensely suspenseful, told by a master storyteller.

“Smoke is one of the most original and enthralling books I have read in a long time. . . The book is absolutely stunning. Smoke is an addictive combination of thriller, fantasy, and historical novel, with a dash of horror. It’s chilling and complex and amazingly imaginative.”

“Full of otherworldly adventure yet chilling in its realism, Smokelures readers into considering these questions about society and ourselves.”

“Vice is made visual in Vyleta’s sprawling, ambitious novel, a Dickensian tale tinged with fantasy . . . which Vyleta reveals with lovely, visceral prose and expert pacing. (A-)”

“The novel’s sumptuous, irresistible narrative--filled with plenty of twists and turns and imagination--will satisfy any reader. A terrific, suspenseful tale.”

“Vyleta writes with intricacy and imagination and skillful pacing; never once would I have considered putting his book down.”

Books That Arouse My Curiousity