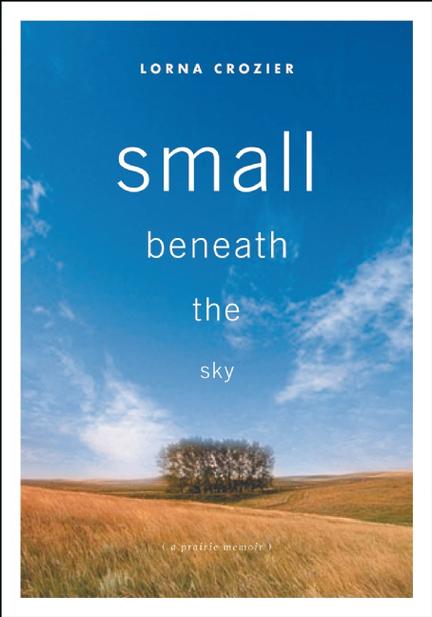 p class=review_text>How fortunate the Prairie sky didn't silence Crozier's literary tongue . . . writing with commendable honesty, the Victoria writer presents a captivating and impressively detailed account of her life and her relationship with her parents. —Vancouver Sun

p class=review_text>An artful blend of poetry and prose, Crozier's memoir is one of those rare books the English essayist Francis Bacon would have recommended to be chewed and digested.' —Subterrain/p>

p class=review_text>Small Beneath the Sky is a slender book, not quite 200 pages long, but it packs a punch. It is about the birthplace that you claim as your own, about your starting point, the way you understand yourself, the place you return where there's nowhere else to go.' It is also about telling a personal story finely, without blinking. The book is in the end not just about Lorna Crozier, but about you and me and everyone else who ever lived their lives in small towns like Swift Current or Owen Sound. —Sun Times

p class=review_text>In these recollections, Crozier courageously tells the story of both light and dust. The secrets have now been released. —Synergy Magazine

p class=review_text>Woven in between the recollections are prose poems that deftly capture the essence of the Saskatchewan aesthetic and experience. I devoured these descriptive passages about dust, wind, snow, insects and other physical aspects of Saskatchewan. They are meaty, evocative, as rich and thick as fresh cream. Crozier, with her stunning precision for words and her inability to overlook the seemingly insignificant, injects spirituality and meaning into the sensory elements of the Prairies. —Regina Leader Post

p class=review_text>Unflinchingly honest, yet both reflective and descriptive, Crozier shares with us her hardscrabble upbringing, making use of both anecdotes and poetry to paint a true-life literary picture of her lower middles class Canadian family. —CFMG-FM

p class=review_text>Crozier's character sketches are solid but it's her poet's eye that rewards an attentive reader. —Toronto Star

p class=review_text>This intimate and moving memoir is filled with a kind of clear prairie light, and reveals all that dwells in the shadows as well as everything that shines. —Jane Urquhart

p class=review_text>Small Beneath the Sky begins with light. Which is so appropriate to this landscape it would seem a shame to begin anywhere else. Light, not dust, humour, not misery, infuse this memoir. Like the Prairies, a thing worth returning to. —Globe & Mail

p class=review_text>Crozier's prose illuminates our world. She is a writer of the first rank. —David Adams Richards

p class=review_text>How fortunate we are that the Prairie sky did not silence Crozier's literary tongue. The Governor General's Award-winning poet has created a vivid and poignant narrative about her upbringing in Swift Current, Sask. —Edmonton Journal

p class=review_text>With her poet's eye, Crozier lays out the taste and smell and feel of her childhood . . . Her memoir is a tender reflection of her youth, and we are left with prairie visions dancing in our heads. —Chronicle Herald

p class=review_text>Poet Lorna Crozier's lyrical, wistful Small Beneath the Sky depicts extreme poverty and family secrets in Swift Current, Sask. In one exquisite scene,Crozier, as valedictorian, must dance the first waltz (just like a bride) at graduation with her unreliable, alcoholic father. —More Magazine

p class=review_text>For the thousands in this valley, like me, who still have prairie dirt under your fingernails and between your toes after decades away, there is a book you're going to want to have . . . Lorna Crozier's new memoir . . . is a book of home . . . if home to you was in your mother's or grandmother's Saskatchewan kitchen, or vegetable garden, that is exactly where it will take you. You will be flung there, breathless, suddenly smelling hot roll kuken and watermelon. Fresh bread and Saskatoon berry jam. Chokecherry syrup. Hot, salty, fat as cracklings spit and hiss on the stove. Today, I am overcome with missing a place I don't want to be. —Kelowna Daily Courier

p class=review_text>Lorna Crozier has written a memoir that is not so much brilliant (although brilliant it is), as profoundly felt, rich with metaphor and lyrical language, pure in its generosity. I found it deeply touching. —Sharon Butala

p class=review_text>How rare such honesty is, and how hard-won, and radical, and beautiful. —Ursula LeGuin

p class=review_text>The Governor General's Award-winning poet's vivid narrative about her upbringing in Swift Current, Sask. Her father, Emerson, was an alcoholic, and we come to know the shame she experienced living with poverty and addiction. Her mother, Peggy, was a tough proud woman who never wasted a potato and who loved her daughter fiercely, if quietly. This is a fast read, due in great part to Crozier's superb ability to tell a story simply and from the gut. —National Post

The House the Spirit Builds

Survival: Context and Compassion Through Grief