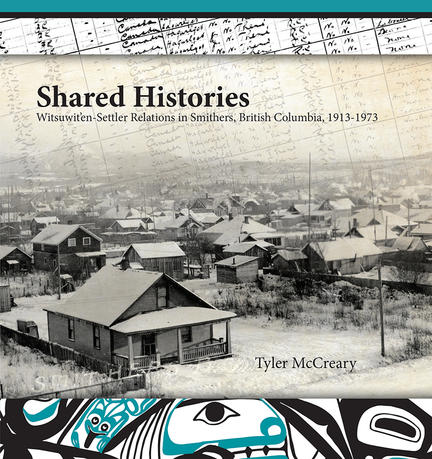 Shared Histories looks deeply into what happened at the intersection of settler dreams and Witsuwit’en reality in the small northwestern British Columbia town of Smithers. Planted in a swamp at the base of a mountain, this railway town tried to exclude the region’s first inhabitants. This collection of hidden histories reveals how generations of Witsuwit’en made a place for themselves in town despite local, provincial, and national efforts push them, and indeed all Indigenous peoples, to the fringes.

Tyler McCreary is an Assistant Professor in the Department of Geography at Florida State University.

From Ormsby Review Long before the release of the Truth and Reconciliation Commission’s final report in 2015, many observers struggled to figure out how we got to a place in Canada where an investigation like that conducted by the TRC was necessary, let alone what “reconciliation” might mean to future relations between Indigenous peoples and those of us of settler descent.

A similar impetus to the conditions that drove Canada to investigate past injustices has resulted in a growing body of literature exploring the history of Indigenous-settler relations — writing that seeks to reverse the erasure of Indigenous peoples in the stories Canadians tell each other about our collective past, and which considers how the lessons we learn might be helpful in providing a path to a much more equitable future. Shared Histories: Witsuwit’en-Settler Relations in Smithers, British Columbia, 1913-1973, by historical geographer Tyler McCreary, is a valuable, nuanced, and richly local addition to this corpus of study.

Other titles by Tyler McCreary

Indigenous Resurgence and Colonial Violence in the Urban Prairie West