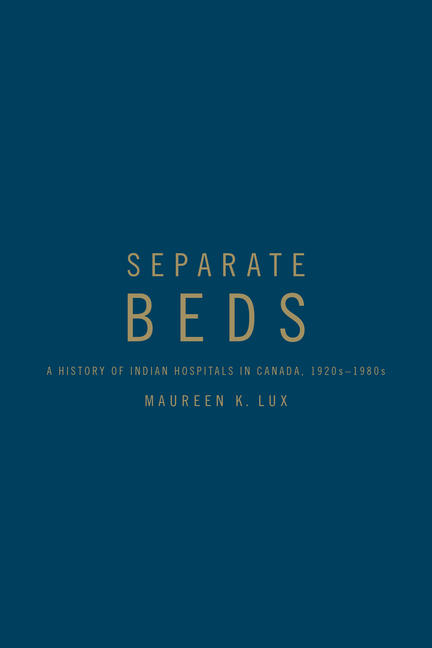 Separate Beds is the shocking story of Canada’s system of segregated health care. Operated by the same bureaucracy that was expanding health care opportunities for most Canadians, the “Indian Hospitals” were underfunded, understaffed, overcrowded, and rife with coercion and medical experimentation. Established to keep the Aboriginal tuberculosis population isolated, they became a means of ensuring that other Canadians need not share access to modern hospitals with Aboriginal patients.

Tracing the history of the system from its fragmentary origins to its gradual collapse, Maureen K. Lux describes the arbitrary and contradictory policies that governed the “Indian Hospitals,” the experiences of patients and staff, and the vital grassroots activism that pressed the federal government to acknowledge its treaty obligations.

A disturbing look at the dark side of the liberal welfare state, Separate Beds reveals a history of racism and negligence in health care for Canada’s First Nations that should never be forgotten.

Maureen K. Lux is a post-doctoral fellow at the Hannah Institute for the History of Medicine.

"Lux has delivered a book that captures the life and failures of Indian hospitals. For all those working in health care, this is a must read."

‘Lux has written a must-read book for scholars of history, political science, and public policy.’

‘separate Beds is an important book. It tells a story not well known by Canadians, or even Canadian historians…. Lux’s book is a useful contribution to the history of colonialism in Canada.’

‘It is a text best read in small doses to digest and internalize… Separate Beds is a compelling book that should be read widely to foster understanding of our shared histories.’

"In painstaking research and matter-of-fact reportage, Associate Professor Lux of Brock University documents Canadian apartheid. Separate Beds: A History of Indian Hospitals In Canada is a riveting and extraordinary account of mistreatment of citizens."

‘Lux’s detailed account will surely be of interest to scholars of Aboriginal history and health care as well as to the people interested in the development of Indian hospitals in Canada.’

‘This is a must read for anyone interested in the history of Canadian Healthcare, Aboriginal health and treaty rights.’

Other titles by Maureen K. Lux