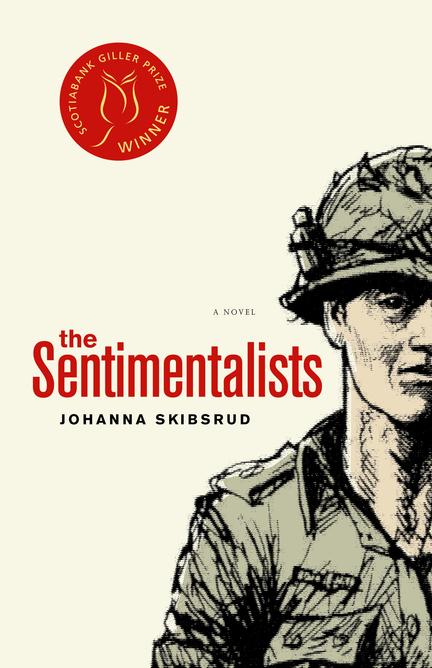 Haunted by the vivid horrors of the Vietnam War, exhausted from years spent battling his memories, Napoleon Haskell leaves his North Dakota trailer and moves to Canada.

He retreats to a small Ontario town where Henry, the father of his fallen Vietnam comrade, has a home on the shore of a man-made lake. Under the water is the wreckage of what was once the town -- and the home where Henry was raised.

When Napoleon's daughter arrives, fleeing troubles of her own, she finds her father in the dark twilight of his life, and rapidly slipping into senility. With love and insatiable curiosity, she devotes herself to learning the truth about his life; and through the fog, Napoleon's past begins to emerge.

Lyrical and riveting, The Sentimentalists is a story of what lies beneath the surface of everyday life, and of the commanding power of the past. Johanna Skibsrud's first novel marks the debut of a powerful new voice in Canadian fiction.

"This novel takes a quirky and lyrical look at the long-lasting effects of the Vietnam war on a family and their friends across both the American and Canadian borders."

"The Sentimentalists beautifully examines the profound affect memories can have not only on an individual, but on all those close to him...The poet's touch is evident throughout...Skibsrud approaches the English language more like an art form, and less like a science. Her carefully composed passages use a sort of philosophical prose to understanding her topics of memory...The Sentimentalists, with its poetic elegance, eloquently describes the never-ending struggle to remember, to simplify and to understand."

"a solid debut and a beautiful tribute to a father-daughter relationship."

"...a slender but deeply contemplative novel..."

"Napoleon Haskell's life has always been a mystery to his daughter -- he was a drifter, an alcoholic and an ex-marine who has never spoken about what happened one night in Vietnam. As he slips into senility, his daughter tries to pull together the crumbling fragments of his memory into a narrative that will explain their dysfunctional family."

"Skibsrud knows what she’s doing: The slow fuse of the novel’s first half turns out to be a very effective setup for the explosive second."

"The writing here is trip-wire taut as the exploration of guilt, family and duty unfolds."

"[Skibsrud's] book is an affirmation of why we still try -- why we still use words to reclaim history, to imagine another's pain, to hold onto what is human in the face of violence and chaos. The Sentimentalists may be profoundly sad, but Skibsrud also reminds us that sadness is not the same as hopelessness."

"A hypnotic meditation on memory, it reaffirms the potential for storytelling to offer clarity and redemption."

"This is less a novel with a single plot than the stories of three characters and their layered, intersecting identities...I recommend it for the book it is rather than the story it's become."

An excellent chance to meet your reading goals , or to score a Book Club pick that everyone stands a chance of actually getting through.