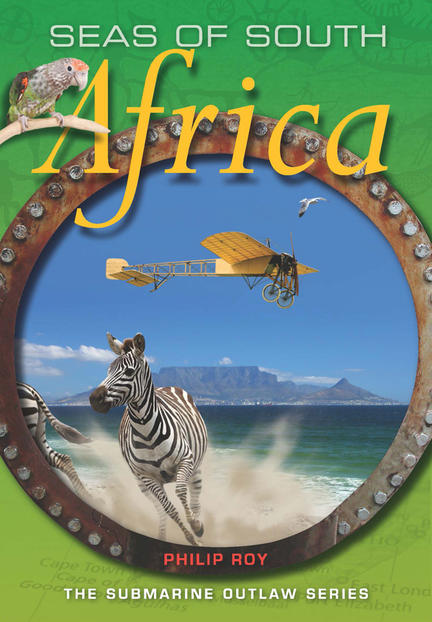 In Seas of South Africa, the sixth volume in the best-selling Submarine Outlaw series, it has been over two years since the young explorer first set sail in his own submarine, with his dog and seagull crew. Now, almost seventeen, Alfred is on the cusp of switching from exploring the world to playing an active environmentalist role in protecting the sea that he loves so dearly. Brought into conflict with the pirate scourge that plagues Africa's eastern shores, Alfred takes action against them, only to bring them into tireless pursuit of him. Escaping overland to Johannesburg, with a reckless young inventor from Soweto, Alfred discovers that the violence which taints the shores of the continent is deeply embedded in the life of South African society, so recently freed from Apartheid. Despairing at the cruelty inflicted upon his friend, Alfred learns that the antidote to violence is not more violence, but the strength of one's heart and an indomitable determination to improve the world, as exemplified in the life of Nelson Mandela. Armed with new inspiration, Alfred is ready to become the eco-warrior he was destined to be.

Philip Roy continues to travel back and forth between Nova Scotia and Ontario, keeping residence in both places. For some half-dozen years now, he has been presenting orally a series of stories at local schools, fairs, and markets called “Happy the Pocket Mouse.” The first of the series, Mouse Tales, illustrated by Andrea Torrey Balsara, will be released by Ronsdale Press in spring 2014. This series of picture books complements Philip’s “Submarine Outlaw” series for young adults, which is now up to volume six. Recently he travelled to Australia to research the materials for the next book in the series, Eco Warrior, to appear in the fall of 2014. Travelling makes for great adventure, Philip contends. The only thing better is writing about it and visiting schools and libraries to share the stories with young readers. Visit Philip Roy’s website at www.philiproy.ca

"Philip Roy....lulls the reader into calm with the beauty of his words....[t]hen...plunges you into heart-stopping tension....In Seas of South Africa, Philip Roy goes beyond the adventure story...and the history...[and]....demonstrates with subtlety that perspective can alter and justify interpretations of the same circumstances...."—CanLit for Little Canadians

My children and I have finally finished Roy's sixth book in the Submarine Outlaw series, and, as much as we thought book 4 (Ghosts of the Pacific) & 5 (Outlaw in India) might be our favourites--the sixth book is now a serious contender. But I will say that Roy is also dealing with some darker themes--mob violence in South Africa, for instance, and modern-day pirates, as well. And yet he always finds such positivity even when Al is confronting major philosophical questions--like what causes people to commit such evil acts--or why humans seem so hell-bent on destroying the planet. What we're really excited about is that Al is starting to become a serious environmentalist. In Seas of South Africa, he befriends Los, an ingenious young man from Soweto, and Los inspires Al to actively strive to save the oceans. Al's mission couldn't be more timely in light of what we know is going on now--with the apocalyptic prediction of the collapse of the oceans in 2,048. So Al just becomes more and more visionary as this terrific series progresses, and more and more complex, too. Not unlike Roy's other novels, this book was extraordinarily well-written, and well-researched. Kudos to Mr. Roy for yet another book that met our every expectation!

Other titles by Philip Roy

The Kingdon of No Worries

Kingdom of No Worries, The