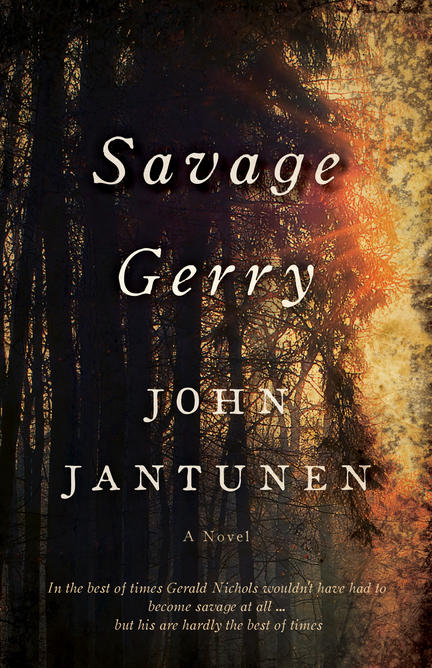 “John Jantunen consistently zigs where other narratives would zag, creating a story that is far stranger and disturbing.” — Shelf Awareness

A thrilling apocalyptic tale that rushes from the inside of a prison to a world that feels even more dangerous. The End couldn’t have come at a better time for Gerald Nichols.

Dubbed “Savage Gerry” by the media, Gerald Nichols became a folk hero after he shot the men who’d killed his wife and then fled into the northern wilds with his thirteen-year-old son, Evers. Five years after his capture, he’s serving three consecutive life sentences when the power mysteriously goes out at the prison. The guards flee, leaving the inmates to die, but Gerald’s given a last-minute reprieve by a jailbreak. Released into a mad world populated by murderous bands of biker gangs preying on scattered settlements of survivors, his only hope of ever reuniting with his son is to do what he swore he never would: become “Savage Gerry” all over again.

Set in a future all-too-near our own against a backdrop of Northern Ontario’s natural splendor, Savage Gerry is a refreshingly Canadian spin on the Mad Max films.

John Jantunen is also the author of Cipher, No Quarter, and A Desolate Splendor. He has lived in almost every region of Canada and currently lives in Kingston, Ontario.

Orville, you in there? the barrel-shaped man called out.

Through the dust and the flicker of flies, his flashlight found Jules coughing into his arm.

But he was cut off by the man before he could continue.

God, don’t it reek in here!

Gerald could see that the barrel-shaped man was short, shorter even than his own five foot eight, and wore a beard a shade longer, its brackish curls straggling over a belly so big and round it’d be a miracle if he could touch the pads of his fingers together in front of him. He had one arm crooked over his mouth to guard against the stench and all Gerald could see of his face were his eyes, black pits winking against the dust.

Smells like something died, the barrel-shaped man was saying and that snapped Gerald out of his daze.

That’d be Orville, he said.

The moment he spoke the flashlight searched him out, striking upon what must have appeared to the other a strange and gnomic cave-dwelling creature cowering on the top bunk and squinting against its glower.

I said, That’d be Orville.

There was a hint of accusation in his voice and that and the way his free hand had searched out the stock of the automatic pistol slung on a strap over his shoulder had Gerald vigorously shaking his head.

No, he said. They never came by with his shot.

The flashlight had taken to darting about the cell, chasing the dark out of its corners. Finding no evidence of Orville’s remains, it again sought out Gerald.

Last I saw he was lying on the floor, about where you’re standing now.

The barrel-shaped man looked down to his feet. The flashlight lit over a stain the colour of motor oil. He seemed to get the point and turned back to the gaping hole in the wall. The beam scanned over the pile of rubble just beyond and the man was just moving after it when Jules finally found the will to speak again.

You want to tell us what the fuck’s going on? he asked.

Well, what do you think? the barrel-shaped man said, turning back and flashing them an impish sort of grin.

“Savage Gerry is a gripping work of speculative fiction set in a spirited landscape that’s often neglected or ignored in Canadian literature. Northern Ontario is much more than just a vibrant setting in this story; land itself takes on the complicated and conflicting traits of the characters who move through it. Jantunen skillfully compels readers to both empathize with and loathe the people who inhabit this dystopian realm. It’s a thrilling novel about outcasts and survivors navigating a harsh world, much in the same vein as works by Cormac McCarthy and Stephen King.” — Waubgeshig Rice, bestselling author of Moon of the Crusted Snow

“John Jantunen’s Savage Gerry is a savage and thrilling apocalyptic tour de force with echoes of Cormac McCarthy’s The Road and George Miller’s Mad Max series. Its gripping anti-hero has a true beating heart that will keep you rooting for him all along the way. Read this book!” — Lee Matthew Goldberg, bestselling author of The Mentor and The Ancestor

“A contemplative blend [of] genre and character.” — Tuerlemot blog

“A rip-roaring post-apocalyptic story told with passion and skill. But, for those willing to read a little deeper, there is another, much more disturbing layer to the book, with Jantunen eviscerating the illusions every one of us holds dear.” — Cloud Lake Literary

In for a Dime