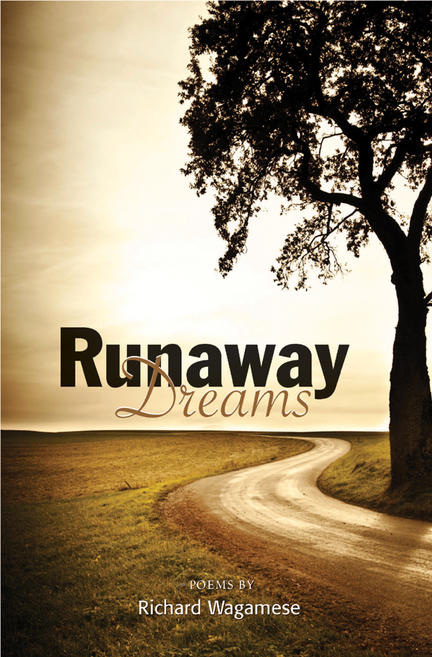 Having developed an impressive reputation for his many novels and non-fiction works, Richard Wagamese now presents a collection of stunning poems ranging over a broad landscape. He begins with an immersion in the unforgettable world where “the ancient ones stand at your shoulder . . . making you a circle / containing everything.” These are Medicine teachings told from the experience of one who lived and still lives them. He also describes his life on the road when he repeatedly ran away at an early age, and the beatings he received when the authorities tried “to beat the Indian right out of me.” Yet even in the most desperate situations, Wagamese shows us Canada as seen through the eyes and soul of a well-worn traveller, with his love of country, his love of people. Through it all, there are poems of love and music, the language sensuous and tender.

“In Runaway Dreams, Richard Wagamese astounds us with his poetic breadth and spiritual alertness. He is equally comfortable and impressive writing about nature, love, jazz, spirituality, or the brutality of residential schools.” —Robert Hilles, Governor General Winner for Cantos from a Small Room

“Richard Wagamese’s first book of poetry, Runaway Dreams, is beyond a revelation, it is simply great stuff from beginning to end…. If more books of poetry were like this one — poetry would actually be popular.” —Michael Dennis

“Reading the long poem is normally a difficult pastime, Wagamese is in skilled command of his materials and makes following his longer efforts as easy as slipping into a warm bath.” —Pacific Rim Review of Books

“The poems in Runaway are introspective but not self-absorbed, intimate, nature imbued, respectful and reverent.” —BC Bookworld

“If I had to make a comparision, I would consider Wagamese, with his opposition to the prevailing culture of our time, in line with Allen Ginsberg, with a mission to uphold the ‘beaten down’ and oppressed of society. To some extent, Wagamese is incomparable because of his unique talent and singular frame of reference.” —Anne Burke, The Prairie Journal

“His style is free. It resembles prose and thought — the runaway thinking of us all.” —Joyce Atcheson, Anishinabek News

“If there is a theme to Runaway Dreams, it is the shared longing of all to leave a legacy when we go. The shared fear we will not…. Runaway Dreams is a magnificent story spoken in poetry.” —Media Indegina

“[These poems] possess a deep attraction because of the heartfelt honesty instilled in the writing. Wagamese embraces life in a huge bear hug, and his enthusiasm becomes unstoppable.” —Prairie Fire Review of Books

“If there is one theme that runs through this collection it is movement—as physical and spiritual travelling, as journeys toward the Old Ones, as displacement and as reconnection, as search for home and identity—”so that planting flowers becomes an Injun thing”—set against the theme of simply being: on the land and embraced by love.” —Canadian Literature

Many of the pieces in storyteller Richard Wagamese's book of poems look and seem more like prose than poetry. The point-of-view is that of a middle-aged man looking back on how he came to find himself within the culture he was born to: “I became an Indian after that” (from “Ceremony”). The poems reveal strong links to the land, to family and to the wisdom of elders. His wry sense of humour appears frequently. Many poems lend themselves to dramatic readings as monologues (“Freddie Hucaluk” and the “Grandfather” series). Others (“The Canada Poem” and “Runaway Dreams”) could inspire group presentations or serve as the basis for creating a video.

Source: The Association of Book Publishers of BC. Canadian Aboriginal Books for Schools. 2012-2013.