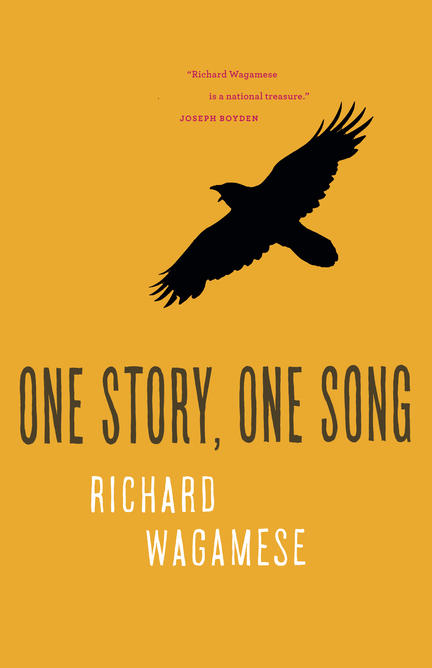 WINNER OF THE 2011 GEORGE RYGA AWARD FOR SOCIAL AWARENESS.

A new collection of warm, wise and inspiring stories from the author of the bestselling One Native Life.

Since its publication in 2008, readers and reviewers have embraced Richard Wagamese's One Native Life. "In quiet tones and luminous language," wrote the Winnipeg Free Press, "Wagamese shares his hurts and joys, inviting readers to find the ways in which they are joined to him and to consider how they might be joined to others."

In this new book, Richard Wagamese again invites readers to accompany him on his travels. This time, his focus is on stories: how they shape us, how they empower us, how they change our lives. Ancient and contemporary, cultural and spiritual, funny and sad, the tales are grouped according to thefour essential principles Ojibway traditional teachers sought to impart: humility, trust, introspection and wisdom.

Whether the topic is learning from his grade five teacher about Martin Luther King, gleaning understanding from a wolf track, lighting a fire for the first time without matches or finding the universe in an eagle feather, these stories exhibit the warmth, wisdom and generosity that made One Native Life so popular. As always, in these pages, the land serves as Wagamese's guide. And as always, he finds that true home means not only community but conversation-good, straight-hearted talk about important things. We all need to tell our stories, he says. Every voice matters.

"Richard Wagamese reminds us that we are all story. And when we share our stories, we build something beautiful and profound. He’s brought us this message before, but he does it better than ever with this book. Richard is on the frontlines of what it means to be human. If we don’t know yet, this book lights the path. He makes me rejoice in our shared humanity. This book is a tonic. And a gift."

Shelagh Rogers, Host of CBC Radio’s "The Next Chapter"

"Wagamese artfully weaves sixty-some short essays -- stories, really -- into an unpretentious philosophy of life rooted in personal observations and experiences, transposing an understanding of traditional Ojibway principles (humility, trust, introspection and wisdom) into modern-day life. Though drawing unflinchingly on his experiences as a native man, a child of residential school survivors, a homeless person and an addict, Wagamese writes with honesty and pathos without becoming ensnared in sentimentality. Yet it is not a book focused on hardships, victimhood or survival; rather, One Story, One Song is a frank and frequently mirthful testament to the prospect of a way forward; a reminder of our responsibility to live principled lives."

"Wagamese's prose addresses both sorrow and joy with a gratitude that can only be earned. One Story, One Song speaks of lessons learned, personal triumphs, and wonderment. These anecdotes glow like embers in a hearth, temporarily dispelling the chill of the world outside, placating with gentle warmth."

"Richard Wagamese is a national treasure."

"One Story, One Song embodies [Wagamese's] belief that only by sharing our stories and being strong enough to take risks will we be able to understand one another. Although the messages in this book are slightly repetitive, Wagamese hopes to drive home the point that we are all more similar to one another that it appears."

"One Story, One Song comprises brief ruminations (most are shorter than three pages) on various topics, many inspired by an anecdote or observation from the author's life... Funny, tender, never bitter, the essays also relate the ongoing struggle for native rights in Canada. Wagamese writes in a refreshingly unadorned style. Indeed, heavy topics like homelessness, alcoholism, and drug abuse, which could easily lead to preachiness or self-pity, are refreshingly unsentimental in their treatment...[One Story, One Song] should be read for the clarity of the author's voice, and for its contribution to the aboriginal experience in Canada."

"The short pieces in One Story, One Song remind us of human beings' place in the world: We are a part of it, not masters of it. And by sharing our stories we share ourselves...One Story, One Song is all about connections, something we all need."

"Equal parts memoir, self-help book and personal affirmation, BC-based aboriginal writer Richard Wagamese's latest effort encompasses the scope of his arduous and wondrous journey to clarity and confidence. Through his creative efforts, he heals past wounds and finds peace with his identity as an Ojibwa man, a former alcoholic and someone who has witnessed the range of human flaws and kindnesses."

"contemplative and lyrical...Wagamese gives no formula for resilience, but his gentle writing soothes the soul and shows that 'liv[ing] in a learning way' resides in appreciating the magnificence and intricacy of simple things."

"Richard Wagamese’s writing is sweet medicine for the soul."

One Story, One Song

In this collection of short stories, Wagamese shares the stories of his life as well as information and musings on First Nations history and related issues. Wagamese emphasizes the importance of listening to the stories of others if you want to understand them and sharing your stories if you want to be understood. The book is divided into four sections that correspond to the four directions of the medicine wheel and which have four overarching themes: East –humility, South –trust, West –introspection and North –wisdom.

Wagamese also wrote One Native Life and Keeper’n Me. The author’s awards include the National Newspaper Award and the Native American Press Association Award.

Caution: Includes discussion of drug use, alcoholism and child abuse.