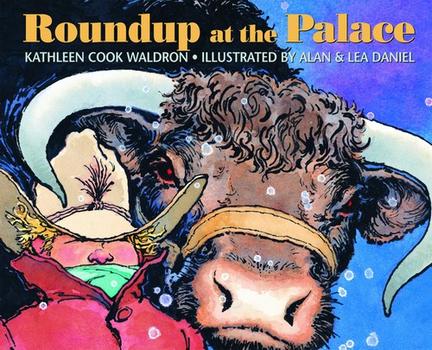 Zack is looking forward to taking Buster the bull to the National Western Stock Show in Denver. As Zack and his dad sing their way down the road, Buster the bull doesn't find his first trip away from the ranch much fun. When the snow turns into a blinding blizzard and Zack's dad must detour through downtown, Buster sees his chance to make his own hay. Thundering out of the truck, Buster gallops straight through the doors of the Brown Palace Hotel where, he confronts Alice, who works with her mother in the hotel gift shop. Zack must act quickly to save his new friend Alice and Buster from disaster.

Kathleen Cook Waldron's lively story of a boy and his bull is complemented by the rich and vibrant painting by Alan and Lea Daniel, who capture the drama and triumph of the roundup at the Palace.

Born and raised in Denver, Colorado, Kathleen's primary rural experiences in her childhood were family fishing trips and long evening walks with her dad and their dog on the golf course. After graduating from high school, she completed three years of university, including one year in Madrid, Spain.

Her first full-time rural experience came after she married Mark Waldron. They spent their first year together working for VISTA (Volunteers in Service to America) in the Napa Valley in California helping a group of eighteen families get set up to build their own homes. She and Mark then moved back to Colorado to complete their degrees (BA for Mark, MA for Kathleen) and begin their family.

In the spring of 1975, they set off with their one-year-old son Levi to begin building their own log home off the grid in central British Columbia. They immigrated to Canada the following year, welcomed their daughter Rosy the year after that, and have lived in the Cariboo ever since. They still make frequent city trips where Kathleen enjoys visits to concerts, plays, museums, professional sporting events, and her otherwise all-urban family. Her rural pleasures include swimming in mountain lakes, canoeing, cycling, cross-country skiing, and hiking. The Waldrons became dual Canadian/US citizens in 1991.

Roundup at The Palace

What do you do when you are confronted by a bull in a hotel lobby? Sing to him!

Zack is heading to the National Western Stock Show in Denver with his father and their bull Buster. On the road, Zack and his dad sing every song they know while the snowfall turns into a blinding blizzard. They detour through the city. In Denver, Alice and her mother hurry to open the gift shop at the Brown Palace Hotel. The truck is stuck in traffic while Buster fidgets in the back. Suddenly he escapes! Down the sidewalk he charges right through the doors of the hotel. In the lobby, he fixes his sights on Alice. Zack catches up and calls to her, “Don’t move...” “Sing to him,” he urges. Alice obliges. Together they calm Buster with a cowboy song as Zack loops his rope through Buster’s halter. They lead him back to the truck, singing all the way.

According to the author’s note, Brown Palace Hotel hosts champion bulls in its lobby during the National Western Stock Show and this story is loosely based on a real incident. Like Zack’s beloved cowboy songs, Kathleen Cook Waldron’s story is well-paced, providing necessary detail while leaving out the non-essentials. Readers learn just enough about Zack and Alice to identify with them. The writing is strong and full of action words that build tension and excitement.

Alan and Lea Daniel have filled the pages with colour and motion. The illustrations are lively and leavened with humour. Buster bursts through the pages as he thunders down the street into the hotel. He is larger-than-life. When Buster confronts Alice, the readers have a birds-eye view: Buster’s great girth in the foreground and Alice, small and vulnerable, in the background. Yet girl triumphs over beast. Actually it is the pair of children, Zack and Alice, remaining calm and using their heads, who avert a near disaster. Roundup at The Palace is an original, entertaining and wholly satisfying story.

“Yip-ee-yi-yay…” Buster the Bull is heading for the Stock Show. Suddenly he jumps off the pickup, straight into a downtown hotel gift shop – with humorous consequences.

Other titles by Kathleen Cook Waldron

Best Figure Skater in the Whole Wide World, The