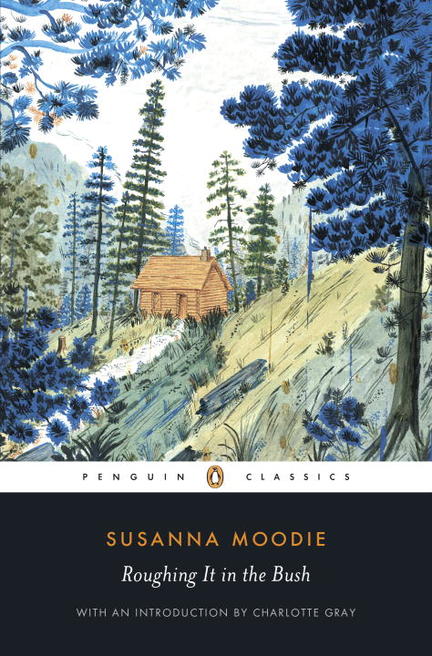 WITH AN INTRODUCTION BY CHARLOTTE GRAY

Roughing It in the Bush, first published in 1852, helped to destroy British illusions about life in Upper Canada. Susanna Moodie described a life of backbreaking labour, poverty, and hardship on a pioneer farm in the colonial wilderness. Her sharp observations, satirical character sketches, and moments of despair and terror were a startling contrast to the widely circulated optimistic accounts of life in British North America, written to entice readers across the Atlantic.

The spontaneity, wit, and candour of Moodie’s account of life on a backwoods farm give Roughing It in the Bush enduring appeal.

Susanna Moodie (1803-1885) was the youngest of the scribbling Strickland sisters. After marrying John Wedderburn Dunbar Moodie in 1831, she immigrated to the backwoods of Upper Canada where she raised a large family and wrote old-world novels and autobiographical accounts of her settlement. She is a landmark of early Canadian literature who has influenced great authors such as Margaret Atwood and Carol Shields.

Other titles by Susanna Moodie

Roughing It in the Bush

Flora Lyndsay; or, Passages in an Eventful Life

Flora Lyndsay, or, Passages in an Eventful Life

Life in the Clearings versus the Bush

Roughing it in the Bush or Life in Canada

The Journals of Susanna Moodie

A Maid, Her Master and the Trial that Shocked a Country

Stranger in a Strange Land (by Laura Boudreau)

In today's Red Letter Day, Alexi Zentner, author of The Lobster Kings and Touch, picks books he wants to read as well as those he'd recommend for a student …