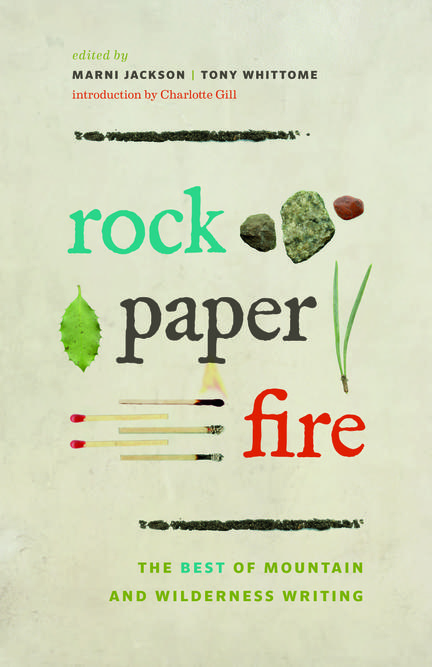 In the past few years, as writing about the outdoors has moved from a minority genre into the mainstream, climbers, adventurers, and environmental activists have gathered at the Banff Centre in the Canadian Rockies to explore their passions through writing. Now, their most inspired work is collected in one volume, Rock, Paper, Fire: the Best of Mountain and Wilderness Writing, compiled by Banff Mountain and Wilderness Program Faculty Editors Marni Jackson and Tony Whittome, and introduced by award-winning writer and veteran tree planter Charlotte Gill. This wide-ranging anthology of fiction, nonfiction, and poetry is about discovering the real excitement of the earth's wild places and their effects on the human creative spirit.

Marni Jackson is a Toronto journalist, author, and editor whose work has appeared in Outside, explore, The Globe and Mail, Rolling Stone, The Walrus, and Brick, among other publications. Her writing has won numerous National Magazine Awards and she is the author of three books of non-fiction. From 2006–2009, Marni was Rogers Chair of the Literary Journalism program at The Banff Centre, a month-long residency for professional non-fiction writers.

Tony Whittome was for many years editorial director of Hutchinson and of Random House U.K., and he is now consultant editor at Penguin Random House. Apart from fiction, history, politics, and poetry, he has published widely on climbing, travel, outdoor adventure, and environmental issues.

Charlotte Gill is the author of the story collection Ladykiller, a finalist for the Governor General's Literary Award and winner of the Danuta Gleed Award and the B.C. Book Prize for fiction. Her work has appeared in many Canadian magazines, Best Canadian Stories, and The Journey Prize Stories, and has been broadcast on CBC Radio. Her narrative non-fiction has been nominated for Western and National Magazine Awards. She lives in Powell River, British Columbia.

Other titles by Marni Jackson

Don't I Know You?

The Myth of the Empty Nest

The Science and Culture of Why We Hurt

Other titles by Charlotte Gill

Deep Forests, Big Timber, and Life with the Tree-Planting Tribe