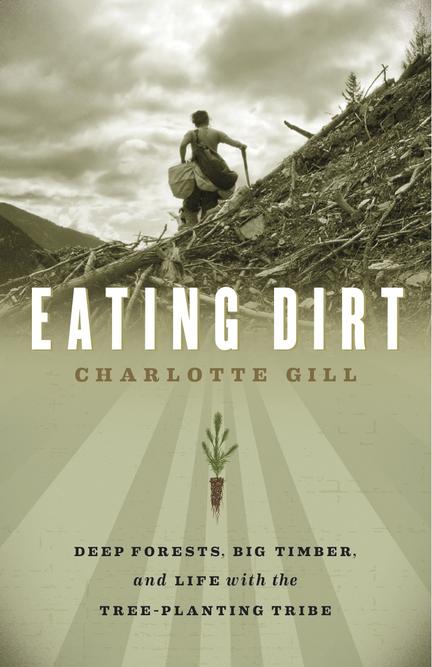 Charlotte Gill is the author of the story collection Ladykiller, a finalist for the Governor General's Literary Award and winner of the Danuta Gleed Award and the B.C. Book Prize for fiction. Her work has appeared in many Canadian magazines, Best Canadian Stories, and The Journey Prize Stories, and has been broadcast on CBC Radio. Her narrative non-fiction has been nominated for Western and National Magazine Awards. She lives in Powell River, British Columbia.

p class=review_text>Charlotte Gill recalls a season of tree planting, meditates on the cold, the heat, the bugs, the bears, the glories of old forests and earthy kinship in her memoir, Eating Dirt. —Leslie Scrivener, Toronto Star

p class=review_text>Combining novelistic insight, research, and nearly two decades of first-hand knowledge of her subject, Gill offers an engrossing, at times meditative account of the makeshift society and piecework economy of tree-planters on Vancouver Island. A thoroughly Canadian story, Eating Dirt is not out of place alongside other classic memoirs of the bush by Susanna Moodie or Farley Mowat. —Quill & Quire Best Books of 2011

p class=review_text>Charlotte Gill delivers an insider's perspective on the gruelling, remote, and largely ignored world of that uniquely modern-day, 'tribe,' the tree planter. She writes the forest like Tom Thomson and the Group of Seven painted it: bringing it vividly to life in all its mythic grandeur with striking details and evocative analogies, using intelligence, verve, and humour to illuminate the dangers that live within, and threaten from without. —BC National Award for Canadian Non-Fiction Jury

p class=review_text>A . . . literary ode to the grittiness of the work, Eating Dirt also educates the reader on tree biology and the history of the West Coast forests. —Globe & Mail

p class=review_text>Anyone familiar with [Gill's] sharp collection of short fiction, Ladykiller, will expect this book to deliver much more than just a taste of dirt. It does . . . Gill combines details about her fellow tribe members with her own observations of the land and the job they're tasked with, and blends descriptions of tree planters' daily routines with anecdotes about unusual creatures and situations they encounter during their travails. In the hands of this wordsmith, the mundane becomes magical . . . With Eating Dirt, Gill has produced a winner. Not all of the two million seedlings she planted during her two decades in the wild will have thrived, but this book will. —Cherie Thiessen, Quill & Quire

p class=review_text>Eating Dirt is the veteran tree planter's homage to not only planting life, but to the larger context in which deforestation and reforestation take place. It is also a journey through [Gill's] planting career as it comes near to its bitter-sweet end. —Noreen Mae Ritsema, Rabble.ca

p class=review_text> . . . Gill worked as a tree-planter for 20 years, and all I can say is: she should have been writing. Well, maybe not, because then we wouldn't have gotten this incredible memoir . . . Eating Dirt exposes what life is like planting trees, peels away the bark to the soft underbelly, and the result is a beautiful and brutal exploration of a unique career and the people who choose it. —In the Next Room

p class=review_text>Eating Dirt, will endure as a testament to the vital but often overlooked actual and symbolic role that forests, tree-planters and tree-planting continue to play in our times. —The Tyee

p class=review_text>With Eating Dirt, Gill has produced a winner. Not all of the million seedlings she planted during her two decades in the wild will have thrived, but this book will. —Quill & Quire

p class=review_text>Gill gracefully guides us through the world of the tree planter from the beginning to the end of a season, dedicating plenty of attention to the details of bush life. And nestled among her personal experiences is her perspective on the world behind the industry: the politics, science and history of forestry around the globe. Gill's strength lies in describing the people she has met . . . They practically jump off the page, thanks to her beautiful prose and sensitivity to detail. —MacKenzie Cheater, Winnipeg Free Press

p class=review_text> . . . an engrossing account of not only tree-planting's unique culture, but of the role it plays in the larger industrial enterprise that surrounds it. —Michael Lawson, National Post

p class=review_text>With this book, Charlotte Gill has fitted a key piece, long missing from the story of West Coast logging. What happens after these wild landscapes have been stripped of trees is an important, if painful topic, and it is hard to imagine a writer (and tree planter!) better qualified than Gill to tell this story of death and rebirth in the woods. In the same spare, unflinching prose that brought her such acclaim for her short stories, Gill takes us into the remote and rarely seen world of the tree planter, immersing us in the unique combination of sweat, fog, heartache and humor that distinguishes it from all other labors. —John Vaillant

p class=review_text>Gill . . . brings all her storytelling ability to make her tree-planting 'tribe' come alive. These are human beings, all right, and the descriptions of their trials and triumphs, the rigours and rewards of tree planting in these massive landscapes are eloquent and evocative . . . Itís a unique work, a lyric saga of toil and sweat and a meditation on the complexities of nature and the changes human beings bring. —Vancouver Sun

p class=review_text>Eating Dirt offers a look at tree-planting life with all of its soggy and gritty details. It tells the story of the magical life of the forest as well as the ancient relationship between humans and trees, which are our slowest-growing renewable resource. The book reveals the environmental impact of logging, and also questions the ability of artificially created conifer plantations to replace original forests that evolve over millennia into complex ecosystems. —Hilary Weston Writer's Trust Prize

p class=review_text>Only a writer as skilled as Charlotte Gill could make the back-breaking work of planting more than a million seedlings sound like one of life's essential adventures. In a carefully balanced story of science, business and friendship, and one that is surprisingly unsentimental, Gill shares her love for Canada's boreal forests, the tragedy of their disappearances and the grueling work involved in replacing them. Reader, you might finish this book feeling relieved you don't plant trees—but you will be wishing you could. —Charles Taylor Prize for Literary Fiction Jury

p class=review_text>A joy of a book! Eating Dirt romps through the grime, the pain, and the legendary, eccentric life-styles of the tribe of tree planters. In this natural history of tree planting, Charlotte Gill discovers beauty even in the clearcuts of our thrashed forests, and the often-deranged culture that works to protect the remnants of a noble environment. —Brian Brett

p class=review_text>Charlotte spent a couple of decades as a tree planter in BC and she shares an intimate look into the industry and the weird world of reforestation which could also be described as a subculture. —Vancouver is Awesome

p class=review_text>Gill's is a book you can live in. You come to speak its language and to feel as she feels. —William Logan, Globe & Mail

p class=review_text>A thoroughly Canadian story, Eating Dirt, is not out of place alongside other classic memoirs of the bush by Susanna Moodie or Farley Mowat. —Quill & Quire

p class=review_text> . . . raw, courageously honest and funny; an insightful journey into the formation of a revolutionary soul. —Francisca Zentilli, Globe & Mail Top 100/i>

p class=review_text>Eating Dirt should be required reading for everyone in BC and millions of others. —Candace Fertile, Victoria Times Colonist

p class=review_text>In prose that is at once lyrical, nuanced and sharp-edged, Gill examines a trade and a way of life, from the micro (the way even the most barren-seeming of clear-cuts is swarming with tiny life) to the macro (the sheer scale of Canada's timber industry). —Brian Bethune, Maclean's

p class=review_text>Vancouver author Charlotte Gill is a tree-planting veteran, and in Eating Dirt she paints a poetic picture of a sometimes gritty occupation. Without glossing over the laborious reality of tree-planting, Gill pens an elegant and beautiful ode to a job she worked and loved for 20 years. —Michelle Kay, Shameless Magazine

p class=review_text>For Charlotte Gill there are no more hips bruised from carrying bags of trees, no more blistered heels, legs rubbed hairless from chafing, no more encounters with bears sniffing at the wild air, no more falling into blurry, wine-dark taverns in lumber towns, but for readers, there is this book, this experience, this gift . . . —Denise Ryan, Vancouver Sun

p class=review_text>The book is like a forest itself. It's very rich and the writing is lush, and full of imagery. Gill allows the reader to see the landscapes that she is travelling through. She is able to take the reader into the forest, and into the brutal tree-planting experience. —Daily Herald-Tribune

p class=review_text>In her new book, Eating Dirt, [Charlotte Gill] questions whether the intricate relationships between species that have developed over centuries in old-growth forests can be replaced through the efforts of an army of shovels. —Canadian Geographic

Other titles by Charlotte Gill

Best of Mountain and Wilderness Writing, the