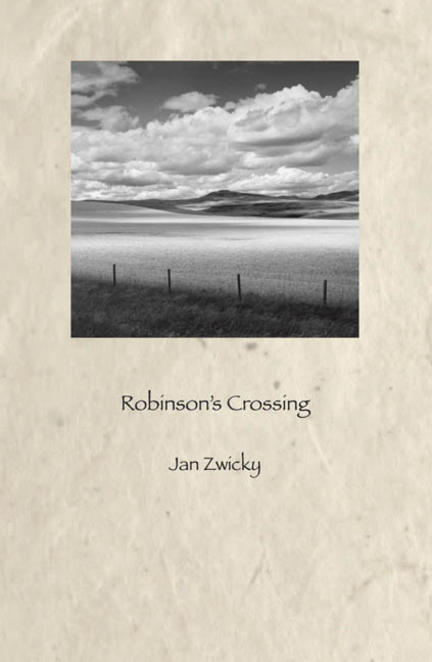 My great-
grandmother slept
in a boxcar on the night
before she made the crossing. The steel
ended in Sangudo then, there was
no trestle on the Pembina, no siding
on the other side. They crossed
by ferry, and went on by cart through bush,
the same eight miles. Another
family legend has it that she stood there
in the open doorway of the shack
and said, “You told me, Ernest,
it had windows and a floor.? - from “Robinson's Crossing?

The poems in this book arise from Robinson's Crossing - the place where the railway ends and European settlers arriving in northern Alberta had to cross the Pembina River and advance by wagon or on foot. How have we crossed into this country, with what violence and what blind love? Robinson's Crossing enacts the pause at the frontier, where we reflect on the realities of colonial experience, but also on the nature of living here- on historical dwelling itself. In long meditative narratives and shorter probing lyrics, Jan Zwicky shows us-as she has in her celebrated Lyric Philosophy and the Governor General's award-winning Songs for Relinquishing the Earth - how music means and meaning is musical.

Jan Zwicky is an accomplished poet, philosopher and musician whose intense and vivid lyricism imbues her poetry with music and passion. Born in Calgary, Alberta, Zwicky studied at the University of Calgary and the University of Toronto before undertaking an academic career teaching philosophy at a number of North American institutions. She is also a professional musician, with an active interest in baroque performance technique. Zwicky is a prolific essayist, as well as the author of a dozen books. Her works have won her the Governor General's Award (Songs For Relinquishing the Earth, 1998) and the Dorothy Livesay Poetry Prize (Robinson's Crossing, 2004) as well as many other accolades and shortlist nominations. Zwicky lives on Quadra Island, British Columbia.

" ... A kind of delicate recovery operation, vividly evoking the past but also puzzling out its impact on the present ... there's a subtle interplay between troubled poems that are about a loss of bearings, and sunny ones about feeling full of purpose and direction ... the end of the rail line at Robinson's Crossing is a beginning point for some challenging meditations on history, constancy, and change."--Barbara Carey, The Toronto Star

"This is a tremendously rewarding book ... what makes Robinson's Crossing, so successful is the degree to which it grounds its philosophical exploration in the intimate details of the body, of concrete, lived experience."--Adam Dickinson, The Malahat Review

"These poems are finely tuned to the intricacies of space and language ... [they] combine personal history and a complex understanding of the colonial experience."--Gillian Jerome, Canadian Literature

"The emotionally rich Robinson's Crossing carries a haunting melody that remains with the reader long after the book is put down."--Paul Tyler, Arc Poetry Magazine

Other titles by Jan Zwicky

Once upon a Time in the West

Essays on the Politics of Thought and Imagination

The Collected Poetry of Carol Shields

The Experience of Meaning

Wisdom in the Age of Climate Crisis

The Poetry of Jan Zwicky

Selections from the Rime Spirituali with Photographs of Josep Maria Subirachs? Passion Façade

Brick Books and the Long Poem