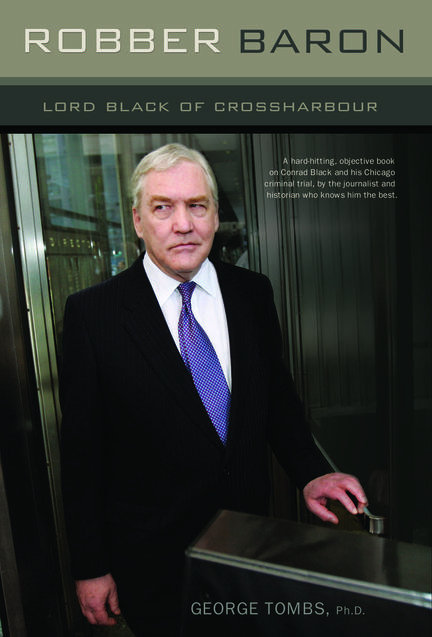 Robber Baronr is an unauthorized biography of Conrad Black, who built the world’s third-largest media empire and is now facing criminal charges in Chicago for alleged fraud, money laundering, and racketeering.

Robber Baron is based on rigorous research, hard-hitting interviews, original documents, and exclusive access to Black and his close family and friends, key associates, critics, and staunch enemies. Written by George Tombs, an award-winning journalist and historian, this book gives a fascinating insider’s look at a complex, driven man who is never out of the news for long.

The book will include key testimony and evidence from Black’s Chicago trial, as well as insights into his defence, strategies, hopes . . . and fears. Love him or hate him, Black is a fighter who never says die. Robber Baron tells the story of a modern-day Citizen Kane, helping readers understand why Black does what he does.

George Tombs is an award-winning journalist, and has worked for TV, radio, newsmagazines, and newspapers, in both English and French. He has reported first-hand on disappearances, refugees, hostage-takings, terrorists, aboriginal societies, desert nomads, Nobel-winning scientists, inventors, and heads of state and government. He served as editorial-writer at The Montreal Gazette, has produced several documentary series for CBC and Radio-Canada, and has a PhD in history from McGill University. He teaches journalism and history at the State University of New York and Athabasca University.

Tombs is a contributor to The Guardian about Conrad Black, and has spoken about Black on CNN, BBC, CBC, CTV, and Global News.

Other titles by George Tombs