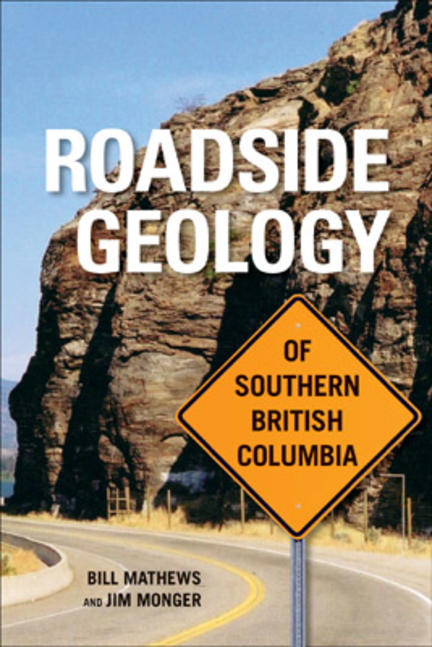 "You are not going to want to drive anywhere in southern BC without it! Fabulous content-rich in roadside detail along with Jim Monger's big-picture context." —Jim Ryan, newsletter of the Cordilleran Section of the Geological Association of Canada

Discover a lava flow that chilled beneath ice. Learn how Ripple Rock claimed 24 ships before engineers finally blew it up. Drive across a slow-moving earthflow that has played havoc with roads since the gold-rush days.

This book covers the geological features in the lower third of British Columbia —from just north of 100 Mile House down to the Canada-United States border.

Bill Mathews (1919–2003) was born in Vancouver, where he completed his Master of Applied Science degree at the University of British Columbia in 1941. He obtained his PhD from the University of California at Berkeley and taught there from 1949 to 1951, when he returned to Vancouver to join the faculty of UBC. He retired in 1984.

Jim Monger was born in England in 1937 and received his geological education at the University of Reading and the University of Kansas, where he met his wife, Jackie. He then obtained his Ph.D. from the University of British Columbia in 1966. He joined the Vancouver office of the Geological Survey of Canada (GSC) in 1965, remained there until 1995, and currently is an emeritus scientist of the GSC and teaches part-time at Simon Fraser University. With the GSC, he studied the stratigraphy of late Paleozoic and early Mesozoic rocks in the western Cordillera and did regional mapping in southwestern British Columbia. Beginning in the early 1970s, following the emergence of plate tectonic concepts, he has attempted to unravel and explain the tectonic evolution of the Cordillera.

Other titles by Jim Monger