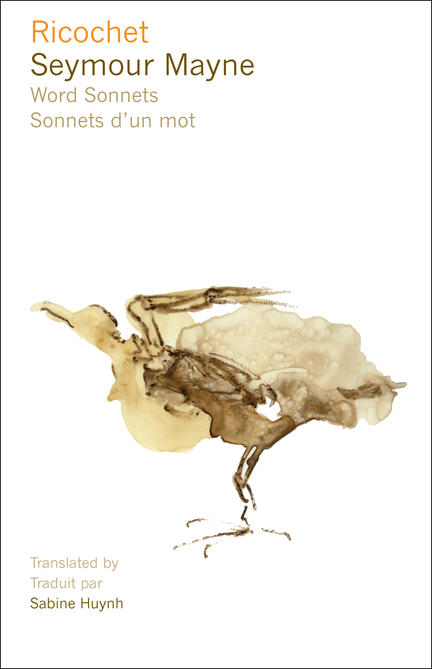 Ricochet is a bilingual collection of word sonnets by one of the chief innovators of the form, Seymour Mayne. It includes three sequences of pithy and evocative poems that encapsulate moments of sharp perception while also drawing attention to instants of humour that suddenly appear in daily life.

Concise and visual in effect, word sonnets are fourteen line poems, with one word per line. Frequently allusive and imagistic, they can also be irreverent and playful. While informed by other short poetry forms such as the Haiku, Mayne’s word sonnets are deeply influenced by the Talmudic tradition of maxims, proverbs and images that instruct and inform everyday life.

Presented with an excellent translation of the poems into French, Ricochet is a unique volume that showcases this innovative new form. The collection also includes a short preface by the poet and an introductory essay by the translator on the challenges of translating word sonnets.

Birds
script
the
auspicious
calligraphy
of
flight
as
they
arc,
link
sky
and
earth.

As it frequently is throughout this collection, the tone is wry. Indeed, the dry humour and colloquial language of several poems contrast forcefully the tone’s more frequent seriousness. The collection ricochets between the two attitudes much as the English originals hit up against the French translations, interrupting the smooth flow of the sequences. The strong attention to and repetition of sound, as well as the—as the translator Sabine Huynh puts it— “daunting challenge of translating fourteen English words into exactly fourteen French words” makes Ricochet an interesting collection to publish bilingually (xxiii). Yet, the thematic interest in language—with issues of words, poetry, and communication as frequently explored as images of nature— makes Ricochet a fitting investigation into the elements of poetry and their potentials for rearticulation.

This is an A5 perfect bound book of word sonnets. Poets for about the last 20-30 years in the UK have produced word sonnets and it has proved to be a very restricting form. It is extremely difficult to produce outstanding word sonnets, worthy of re-reading, as they tend to end up being one or two sentences written vertically with a line count of 14 with the 'so what' factor. Some do have more than one word to a line, but Mayne's word sonnets all have one word to the line as can be seen in DECEMBER FLIGHT: These starlings swerve in flocks, turning their frantic wings towards the sun's slanting light. This word sonnet builds a laudable image. Nature is predominant in Seymour Mayne's word sonnets, as is a sense of spirituality, which is not commonly achieved in this form. JUNE HEAT sets a nature scene and focuses on light: A flashback of snow shadows this thick lingering wind and curtain of humid light. Doreen King, New Hope International Review

Other titles by Seymour Mayne

An Anthology of Canadian Jewish Poetry