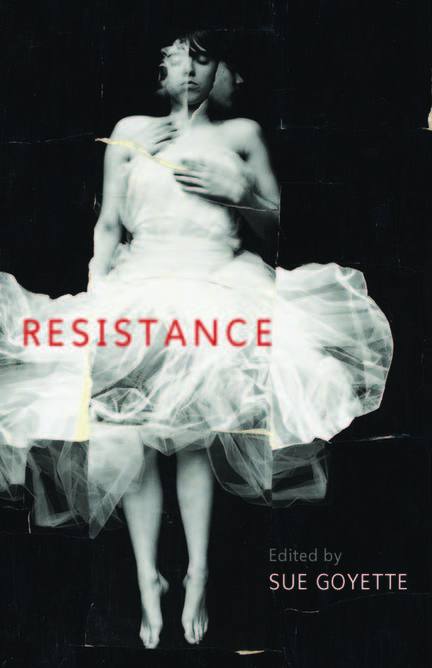 Writers across the globe speak out against sexual assault and abuse in this powerful new poetry anthology, edited by Sue Goyette.

These collected poems from writers across the globe declare one common theme: resistance. By exploring sexual assault and violence in their work, each writer resists the patriarchal systems of power that continue to support a misogynist justice system that supports abusers. In doing so, they reclaim their power and their voice.

Created as a response to the Jian Ghomeshi case, writers including Joan Crate, Ashley-Elizabeth Best, and Beth Goobie are, as editor Sue Goyette explains, a “multitude, resisting.” The collection could not be more timely. The work adds a new layer to the ever-growing #MeToo movement.

Resistance underscores the validity of all women’s experiences, and the importance of dignifying such experiences in voice, however that may sound. Because once survivors speak out and disrupt their pain, there is no telling what else they can do.

Sue Goyette lives in Halifax, Nova Scotia and has published three books of poems, The True Names of Birds, Undone and outskirts (Brick Books) and a novel, Lures (HarperCollins, 2002). Her fourth collection of poems, Ocean, is forthcoming from Gaspereau Press in 2013. She's been nominated for several awards including the Governor General's Award for Poetry, the Pat Lowther, the Gerald Lampert, the Thomas Head Raddall Atlantic Fiction Award and won the 2008 CBC Literary Prize for Poetry, the 2010 Earle Birney Prize and the 2011 Bliss Carman Award. Her poetry has appeared on the Toronto subway system, in wedding vows and spray-painted on a sidewalk somewhere in Saint John, New Brunswick. Sue currently teaches in the Creative Writing Program at Dalhousie University, is faculty for the Banff Wired Writing Studio and works part-time at the Writers’ Federation of Nova Scotia.

“The poems in Resistance do more than resist: they testify and bear witness, grieve and lament, howl and spark… A deeply moving and urgently necessary collection.” —Lisa Richter, author of Closer to Where We Began
"[This] anthology offers hope in the form of community." —Herizons

“A monument to defiance against a terrible, pervasive darkness, demanding our attention and action.” —Nisha Patel, author of Limited Success

“Resistance claims poetry is essential to processing pain . . . . and these voices can seek to claim safety back through ‘resilience and resistance.’” —Micheline Maylor, author of Little Wildheart

Other titles by Sue Goyette

The Brief Reincarnation of a Girl

The Best Canadian Poetry in English 2013