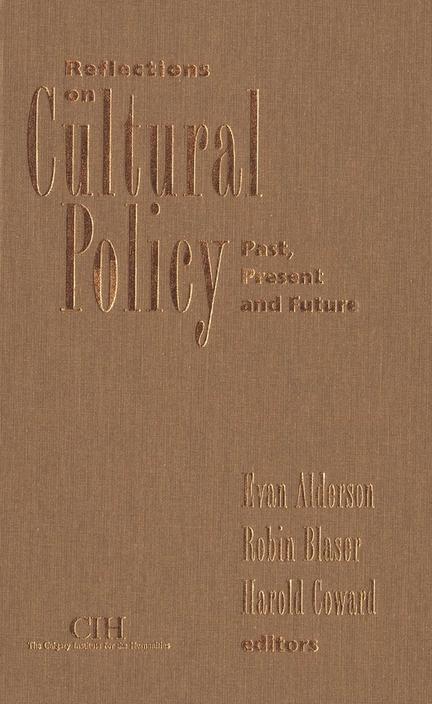 Looks at the roles various world views have played in generating cultural policies at various times in Western history.

Evan Alderson’s introduction places the work within its social, political and historical framework. Robin Blaser addresses the problem of how we can begin to locate a responsible cultural position at the present time. The volume’s historical progression begins with John Humphrey looking at the relation of arts and state in Imperial Rome. Haijo Westra focusses on the relation of language and culture in the medieval world. Jonathan Bordo examines the emergence of the individually framed picture in the Renaissance. Steven Cole examines the artistic autonomy of English Romanticism. Hazard Adams outlines a conception of cultural policy through William Blake. Cultural policy is brought closer to the Canadian context with Gordon Fearn’s discussion of communications policy in Canada. Anthony Welch takes up the process of re-comprehending culture within the revolution of communications by examining revolutionary and pre-revolutionary Iran.

The two final essays take up the challenge of positing the hope of the post-modern. Barry Cooper begins his examination of the relevant part of post-modernism in the sixth century A.D. Robert Kroetsch sees only a longing for order that must be abandoned so that we may measure the depth of our uncertainties and learn to converse across them. Robin Blaser reminds us in his “Afterthoughts” that much of our current unease stems, not from too many differences, but from too few.

This volume speaks in a single voice both to those interested in the pragmatics of current cultural policy and to those whose primary allegiance is to the life of the imagination. It is not just a scholarly exercise, but also a call for action — to a more comprehensive and informed engagement with our present cultural condition.

Evan Alderson is retired as an Associate Professor in Simon Fraser Universityâ??s School for the Contemporary Arts (of which he was the founding Director) and Director of the Graduate Liberal Studies Program.

Harold Coward was the Director of the Centre for Studies in Religion and Society at the University of Victoria.

Born in Idaho in 1925, Robin Blaser became a key figure in the San Francisco Renaissance movement. His work was anthologized by Donald Allen in The New American Poetry along with the works of his companions Robert Duncan, Robert Creeley, and Jack Spicer. Blaser came to Canada in 1966 to teach at the newly opened Simon Fraser University where he taught in the English department until his retirement. He became a Canadian citizen in 1972. Poet, scholar and teacher, Robin Blaser has been a mentor to many writers, poets and intellectuals worldwide. A celebration of Robin Blaser’s work, The Recovery of the Public World: Essays on Poetics in Honour of Robin Blaser, edited by Charles Watts and Edward Byrne, was published in the fall of 1998. Blaser passed away in 2009.

Harold Coward is a scholar of international reputation with distinguished contributions to both the University of Victoria and University of Calgary throughout his extensive career. After retiring from the University of Victoria as director of the Centre for Studies in Religion and Society, he continues to be involved as a research fellow. He is currently a member of the Genome BC Board of Directors, where he serves as a specialist on ethics and biotechnology. In June 2002, Dr. Coward was also selected as one of the twenty-five power thinkers in British Columbia by BC Business Magazine.

Leslie S. Kawamura is an Assistant Professor, Department of Religious Studies, University of Calgary, Alberta. He holds a Ph.D. from the University of Saskatchewan, Saskatoon, in Far Eastern Studies (1974). He has studied at the Kyoto University (Japan) and has taught at the Nyingma Institute (Berkeley), Institute of Buddhist Studies (Berkeley), and the University of Saskatchewan (Saskatoon). His publications include Mind in Buddhist Psychology (with H.V. Guenther, Dharma Press, 1975) and Golden Zephyr (Dharma Press, 1975). He was a founding member of the Honpa Buddhist Church of Alberta and the Canada-Mongolia Society.

Other titles by Robin Blaser

Other titles by Harold Coward

Silence, the Word and the Sacred

Language in Indian Philosophy and Religion

The Calgary Conference on Mysticism 1976

Humanities in the Present Day

Seeking a Common Vision for a Troubled World

Reflections on the UN Convention on the Rights of the Child