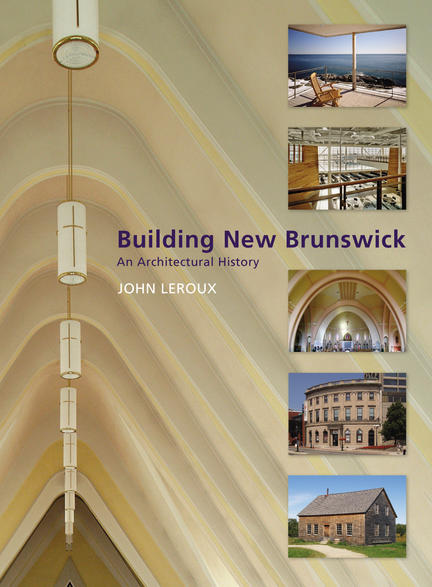 Building New Brunswick takes us on a journey through time and place to discover this provinces architectural legacy. Beginning with the homes of the Mikmaq and Maliseet, we move forward through the past: Acadian and Loyalist settlement, colonial and post-colonial periods, both post-World War eras, and on into the 21st century. A wealth of photographs, engravings, and architectural renderings complement the text. Examining domestic buildings, public architecture, commercial structures, bridges, and industrial sites, this beautifully designed book documents the history of the provinces architecture and the many influences contributing to its visual landscape. Building New Brunswick will be published to coincide with a major exhibition on New Brunswick architecture, also curated by John Leroux, scheduled to open at the Beaverbrook Art Gallery in Fredericton in June 2008.

Architect and art historian John Leroux takes a holistic view of his profession, seeing beyond buildings themselves into the cultural, intellectual and physical landscapes to which they contribute. Born in Fredericton, Leroux graduated from the McGill School of Architecture in 1994 and completed a Masters degree in Canadian Art History at Concordia University in 2002. He has worked at several award-winning architecture firms in Toronto, Atlanta and Fredericton, and also teaches at the New Brunswick College of Craft and Design and St. Thomas University. He has won many awards for architectural and public art projects throughout Canada, and has pursued various creative disciplines such as set design for Theatre New Brunswick. A contributing architecture columnist for the Telegraph-Journal and Canadian Architect magazine, he is also the author of three books on New Brunswick architecture: A Fredericton Alphabet, Building Capital: A Guide to Fredericton’s Historic Landmarks, and Building New Brunswick: an architectural history.

The curator of history and technology at the New Brunswick Museum, Gary Hughes has published articles and curated numerous exhibitions on the military and architectural history of New Brunswick. He is the author of Music of the Eye: Architectural Drawings of Canada's First City 1822-1914.

Robert M. Leavitt began working with the Passamaquoddy language in the 1970s and first met David A. Francis when he was curriculum developer for the Passamaquoddy bilingual education program at Indian Township. He a professor at the University of New Brunswick in Fredericton, where he was director of the Mi'kmaq-Maliseet Institute for fourteen years. He has written extensively about Passamaquoddy-Maliseet language, culture, and history, often in collaboration with David A. Francis.

Stuart Smith is Professor Emeritus of Art History at the University of New Brunswick and a former director of the Beaverbrook Art Gallery. He has contributed to numerous publications and has worked for many years to preserve New Brunswick's architectural heritage.

Other titles by John Leroux

A Vision in Wood and Stone

The Architecture of Mount Allison University

Other titles by Robert Leavitt

Mi'Kmaq Of The East Coast