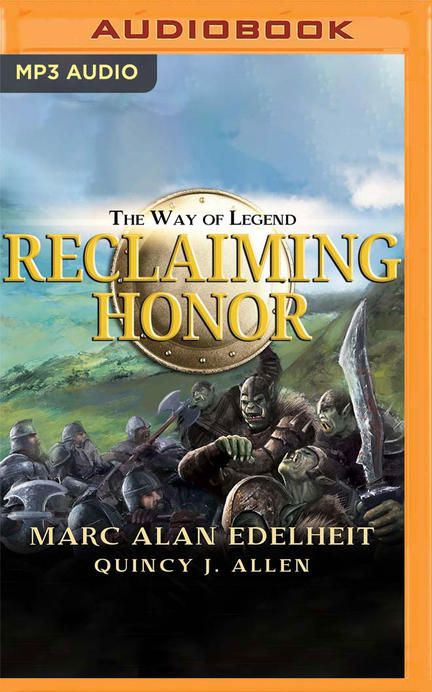 Best-selling and award-winning author of STIGERS TIGERS and the KARUS SAGA, Marc Alan Edelheit has teamed up with national best-selling author Quincy J. Allen to deliver a fresh epic fantasy adventure, told from the perspective of dwarves. This action-packed series introduces a new hero, and fighter, Tovak Stonehammer.

The dwarven nations are facing extermination. Their ancient enemy has returned. The Horde is coming and, along with it, a dark tide is spreading across the world of Tanis. One by one, the free peoples of the world have fallen under a shadow, crushed by the merciless boot of the Horde.

The Syrulian Empire, the last buffer state between three dwarven nations and the advancing armies of the Horde, has fallen. Vastly outnumbered, the dwarves must undertake the Great March, uprooting their entire civilization in search of a new homeland. They hope to find a safe harbor beyond the reach of the enemy, for the nations are not strong enough to withstand the might of the Horde.

Every sword is needed.

A Pariah amongst his people, an outcast and undesirable, Tovak intends to serve and do his part. He must hide his true identity in hopes of making a name for himself and proving his worth. Punished for the actions of his father, something in which he had no part, he has suffered one setback, one injustice after another. Yet his faith in Thulla - the rejected god of his people - is strong and has kept him going. Tovak has pursued his dream of serving his people and working towards the day when he will be able to cast off the mantle of Pariah and build Legend of his own.

Bearing the burden of his people's disdain and his family's disgrace, Tovak has joined a warband. Armed with his faith, determination, and courage, he must face heartless comrades, deadly monsters, and the enemy who would like nothing better than to place any dwarf's head on a stake.

Will Tovak rise to the occasion? Or will he falter and fall before the blades of the Horde or, worse, his own comrades when they discover the truth? Tovak must find a way to reclaim his honor and prove his worth. All the while, he might also be the key to his people's salvation, or perhaps even their downfall...for a true god has taken an interest in him and his future. The path of destiny lies before him and so, too, does the Way of Legend.

Set upon the world of Tannis, some years before the arrival of Karus and the Lost Legio IX, this book is a Last War Novel.

Marc Alan Edelheit has a Bachelor's Degree in Science and obtained a Masters in Education as a Reading and Writing Specialist. He is currently an executive in the healthcare industry staying up late at night to work on his novels. Marc has traveled the world, from Asia to Europe, even at one point crossing the border at Check Point Charlie in Berlin toward the end of the cold war. Marc is the ultimate history fan and incorporates much of that passion into his work to bring greater realism to his fans. He is also an avid reader, devouring several books a week, ranging from history to science fiction and fantasy. Marc currently resides in New Hope, Pennsylvania, just miles from where Washington crossed the Delaware.

Other titles by Marc Alan Edelheit

Other titles by Quincy J. Allen