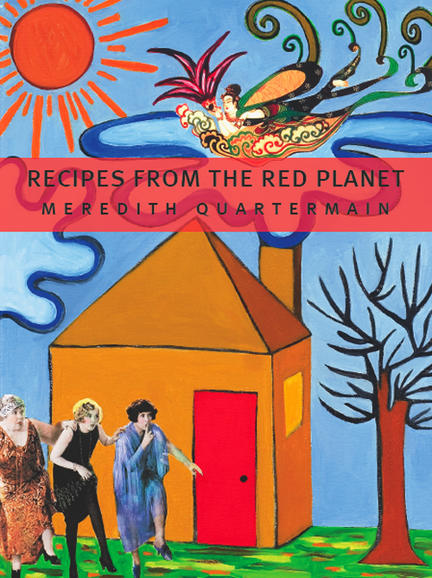 Suppose fiction is a mansion of mirrors where narrative, setting and plot are characters, and suppose this castle is haunted by Martians constantly rearranging, reversing and transelating its furniture of myths, fables and nursery rhymes. Let's play space-wars, say the Martians, it's just a game ï?? our guns shoot words. You zap a Martian. She disappears, but it turns out this Martian is a master chef who even created a recipe for life. How are you going to get the recipe back? How rebuild her carnival laboratory?

Near the end of these wry and witty pages we are told of someone from Ontario, and the same page asks, Where is Ontario from? The same could be asked of the Red Planet, or Quartermain's ingredients: her lists, her seemingly endless strings of relations made tastier by the weight of form, be they tales, news reports, voice imitations. Metaphysics, local history, classics, astronomy ï?? the reference range is vast, but so is the contemporary experience. A rising crust! ï?? Michael Turner

Meredith Quartermain is a poet and novelist living in Vancouver, British Columbia. Her first book of poetry, Vancouver Walking, won a BC Book Award for poetry; Recipes from The Red Planet was a finalist for a BC Book Award for fiction; and Nightmarker was a finalist for a Vancouver Book Award. A novel called Rupert's Land was released by NeWest Press in Fall 2013. She has since published a collection of stories entitled I, Bartleby, in 2015, and a novel, U Girl, in 2016. She is also cofounder of Nomados Literary Publishers, who have brought out more than 45 chapbooks of innovative Canadian and US writing since 2002. From 2014 to 2016, she was Poetry Mentor in the SFU Writer's Studio Program, and she has enjoyed leading workshops at the Kootenay School of Writing, The Toronto New School of Writing and Naropa University. In Spring 2020, her latest collection of poems, Lullabies in the Real World, will be released as a part of the Crow Said Poetry Series.

Other titles by Meredith Quartermain

Lullabies in the Real World