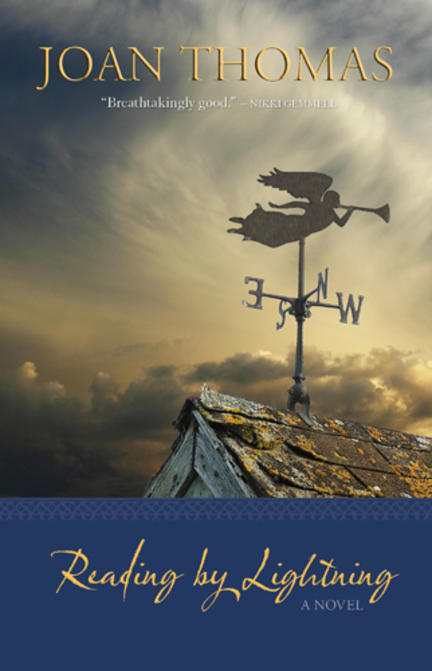 Lily Piper and her family live in an ephemeral world, due to collapse any moment when the Lord comes to pluck His faithful from the drought-ravaged Prairie. Lily tries to be ready, but she is restless, not the daughter she feels her mother wants. As she tries to invent herself, she conjures, too, an imagined past for her beloved father in an effort to understand him and the demons he battles. In her teens, Lily is sent to England to care for her Grandmother and further explores the delicious question of who she might become. She falls in love with her adopted cousin, learns to experience life in all its ambiguity, and waits with the rest of England for World War II to start — until the news she has been dreading arrives on the doorstep, and she is called home to face a future she thought she had escaped. Reading by Lightning is a Bildungsroman of great wit and depth. Thomas's prose is wry and intimate, elegant and devastatingly funny. Her engrossing story of Lily Piper tells us something of how we can make sense of a future when the future is something we can hardly imagine.

JOAN THOMAS’s first novel, Reading by Lightning, won the Amazon First Novel Award and the Commonwealth Writers’ Prize for Best First Book, and was longlisted for the International IMPAC Dublin Literary Award, among other honours. Curiosity, her second novel, was also nominated for the IMPAC Award and was longlisted for the Scotiabank Giller Prize. Her most recent novel, The Opening Sky, was a finalist for the Governor General’s Literary Award for Fiction. Thomas was the 2014 recipient of the Writers’ Trust Engel/Findley Prize for a writer in mid-career. She lives in Winnipeg.

"We experience this writing with our noses and ears and eyes and fingertips."

"Lily Piper's search for home — a place where life can be at once familiar and momentous — is utterly absorbing, told with consummate grace."

"The book is destined to be classic of Canadian Prairie Literature. With writing as fresh and as beautiful as a Prairie landscape, Joan Thomas weaves a tale of mythical proportions."

"A stunning prairie novel... The dialogue between characters blends emotions and words in an alchemy of tension... If Joan Thomas is an unknown name to you, that's about to change."

"Thomas writes like an angel... Her prose is carefully considered, troubled, alert to the texture of experience... singular, thoughtful writing that makes the world seem strange."

"Like the man in the whirlwind, the reader of this fine novel is snatched away, deposited in a different place — and profoundly changed by the experience."

"A compelling story burnished by spare and powerful writing. This is a fabulous novel, full of grace and delicious discovery, haunted by the flavour of memory and the prairies in World War II."

"Joan Thomas's writing is so precise, so surprising, that on any given page you might stop, only to read the words again slowly."

"In fresh, exhilarating, masterful prose, Joan Thomas's novel explores the question of belonging. The wit, the wisdom and the quality and generosity of psychological insight make Reading by Lightning the unanimous selection of the judges."

"Thomas's novel is a beautifully described and carefully detailed intersection of competing landscapes. ... Precise, complex, and elegant, Reading by Lightning flashes with wit and insight and illuminates our understanding of what it means to be a sojourner in all the familiar places."

Other titles by Joan Thomas