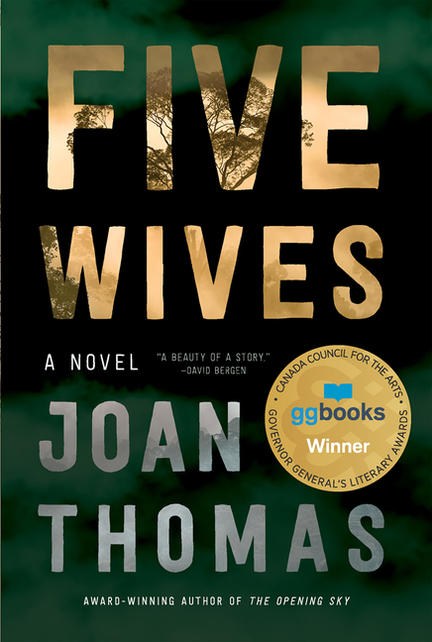 WINNER OF THE GOVERNOR GENERAL'S LITERARY AWARD FOR FICTION

A GLOBE AND MAIL, CBC BOOKS, APPLE BOOKS, AND NOW TORONTO BEST BOOK OF THE YEAR

In the tradition of The Poisonwood Bible and State of Wonder, a novel set in the rainforest of Ecuador about five women left behind when their missionary husbands are killed. Based on the shocking real-life events

In 1956, a small group of evangelical Christian missionaries and their families journeyed to the rainforest in Ecuador intending to convert the Waorani, a people who had never had contact with the outside world. The plan was known as Operation Auca. After spending days dropping gifts from an aircraft, the five men in the party rashly entered the “intangible zone.” They were all killed, leaving their wives and children to fend for themselves.

Five Wives is the fictionalized account of the real-life women who were left behind, and their struggles – with grief, with doubt, and with each other – as they continued to pursue their evangelical mission in the face of the explosion of fame that followed their husbands’ deaths.

Five Wives is a riveting, often wrenching story of evangelism and its legacy, teeming with atmosphere and compelling characters and rich in emotional impact.

JOAN THOMAS’s first novel, Reading by Lightning, won the Amazon First Novel Award and the Commonwealth Writers’ Prize for Best First Book, and was longlisted for the International IMPAC Dublin Literary Award, among other honours. Curiosity, her second novel, was also nominated for the IMPAC Award and was longlisted for the Scotiabank Giller Prize. Her most recent novel, The Opening Sky, was a finalist for the Governor General’s Literary Award for Fiction. Thomas was the 2014 recipient of the Writers’ Trust Engel/Findley Prize for a writer in mid-career. She lives in Winnipeg.

"Thomas’s blend of fact and fiction is effective, and her vivid descriptions evoke a distant past, giving readers a glimpse into a bygone era and the patriarchal structures at play.

“Five Wives is an engrossing, thoughtful read, and a fresh testament to Thomas’s narrative powers — and her ability to locate a human pulse under the often-deafening drumbeats of religious and cultural tradition.”

“Brilliant, eloquent, curious, far-seeing . . . Thomas is a beautiful writer. . . . [Her] remarkable feat of imagination puts her in [Alice] Munro’s league.”

“To take a true, shocking story and tell it from the inside, without judgment or theatrics but with an unwavering respect for the facts and a generosity of imagination that is the hallmark great storytelling, is no small feat. Thomas has more than risen to the challenge. This is a brave, important, utterly absorbing novel.”

“Joan Thomas eviscerates the myth of the benevolent missionary in this fictionalized account of how evangelicals descended on the Waorani, an Ecuadorean Indigenous community, devastating their culture and lives.”

“This is a riveting, gut wrenching piece of true fiction (if there is such a thing), one that I read with amazement . . . a brave, totally absorbing book.”

“Joan Thomas is like an explorer who has gone out to discover the missionary tribe, and then returned as witness to its fallibility. Thomas does not preach, nor does she judge. What amazes most is how, through a deft sleight of hand and deep compassion, the author turns the idea of salvation upside down and exposes the invader. A beauty of a story.”

“Magnificent . . . . Five Wives is riveting, from start to finish. The season’s must-read for historical fiction fans.”

“What a wonderful book! Joan Thomas takes us deep into Operation Auca and into the wild jungle of her characters’ hearts. This gorgeous, nuanced retelling offers up historical events in a new light and forces us to ask difficult and timely questions about colonialism, indigeneity, and faith.”

Other titles by Joan Thomas