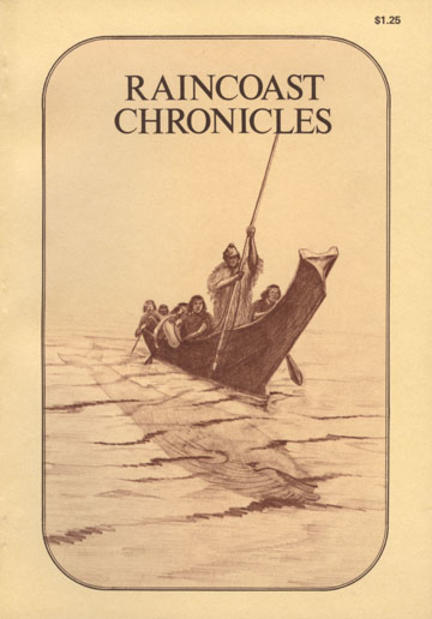 The first issue of Raincoast Chronicles, originally published in 1972 as a periodical by the BC Coast Historical Society, is now available as a special collector's item.

Winner of the first Eaton's British Columbia Book Award, this is the innovative institution at the heart of BC regional publishing. Northwest history and folklore, unromanticized, in a unique magazine format, blending reminiscences, articles, drawings, photos. . .

"Utterly absorbing. . . until Raincoast Chronicles came along the fabulous west coast rum-runners and ghost logging camps went unrecalled save in the dimming memories of oldtimers." -Maclean's

"The magazine is a thoroughly professional production in terms of design, layout and graphics, and the quality of the writing is just as impressive." -Quill and Quire

"Raincoast Chronicles reveals western identity. . . as dense as the undergrowth in the rainforest, and as richly alive." -CBC Radio

Howard White was born in 1945 in Abbotsford, British Columbia. He was raised in a series of camps and settlements on the BC coast and never got over it. He is still to be found stuck barnacle-like to the shore at Pender Harbour, BC. He started Raincoast Chronicles and Harbour Publishing in the early 1970s and his own books include A Hard Man to Beat (bio), The Men There Were Then (poems), Spilsbury's Coast (bio), The Accidental Airline (bio), Patrick and the Backhoe (childrens`), Writing in the Rain (anthology) and The Sunshine Coast (travel). He was awarded the Canadian Historical Association's Career Award for Regional History in 1989. In 2000, he completed a ten-year project, The Encyclopedia of British Columbia. He has been awarded the Order of BC, the Canadian Historical Association's Career Award for Regional History, the Stephen Leacock Medal for Humour, the Jim Douglas Publisher of the Year Award and a Honorary Doctorate of Laws Degree from the University of Victoria. In 2007, White was made an Officer of the Order of Canada. He has twice been runner-up in the Whisky Slough Putty Man Triathlon.

Other titles by Howard White

Here on the Coast

Reflections from the Rainbelt

Writing in the Rain

edited by Peter A. Robson
introduction by Howard White

From Gibsons to Powell River