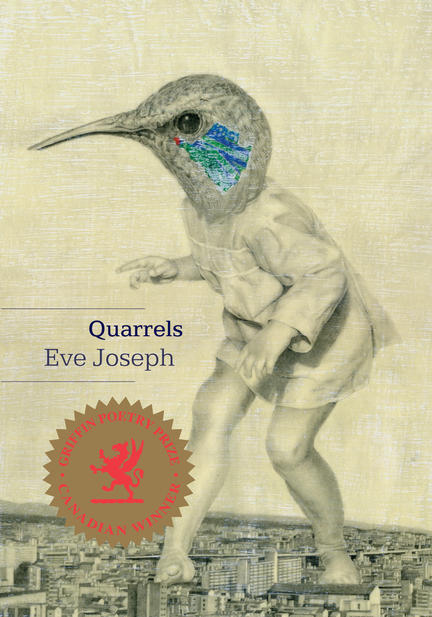 WINNER, 2019 GRIFFIN POETRY PRIZE The poems in this collection reach for something other than truth, the marvelous. Leaves fall out of coat sleeves, Gandhi swims in Burrard Inlet. The poems are like empty coats from which the inhabitants have recently escaped, leaving behind images as clues to their identity. There are leaps between logics within the poems, and it is in these illogical spaces where everything comes together, like the uplift of the conductor’s hand to begin a piece of music where, as Arvo Part put it, the potential of the whole exists.

Griffin Prize Judges’ Citation: “In Quarrels, Eve Joseph’s delightful collection of prose poems, you enter the marvelous and that is the truth! The poet has surrendered herself to the realm of the illogical, trusting that it has a logic of its own, and the outcome is, indeed, a new music. These poems are intriguing spaces and moments defeating the boundaries of the real, but rest assured, Joseph leads you by the hand with warmth, wit and empathy.

Perhaps these poems are crystallisations of a deeply human, spiritual knowledge, gathered over decades working in a hospice. Joseph’s previous book, the exceptional memoir, In the Slender Margin, renders this experience. Certainly, without gravity, poems wouldn’t be able to sing. As distillations of life, these poems, with beauty and charm, hold their own credibility: an omnipresent, merely-in-glimpses-tangible marvelousness, miraculously fastened to the pages of a single slender volume that will fit into most pockets and assure magnificent company on any given journey.”

EVE JOSEPH’s first book of poetry, The Startled Heart (2004), was nominated for the Dorothy Livesay Poetry Prize. The Secret Signature of Things (2010) was also nominated for the Dorothy Livesay Poetry Prize, along with the City of Victoria Butler Book Prize and the Acorn-Plantos Award. She was awarded the 2010 P.K. Page Founder’s Award for Poetry. Her non-fiction has been shortlisted for the CBC Literary Awards, and her essay “Intimate Strangers” was nominated for a National Magazine Award and won both the Malahat Review’s Non-Fiction Award and the Western Magazine Awards “Gold” category for B.C. and Yukon Territories. Her work has been published in a number of Canadian and American journals and anthologies. Eve Joseph lives in Victoria, B.C.

Other titles by Eve Joseph

In The Slender Margin