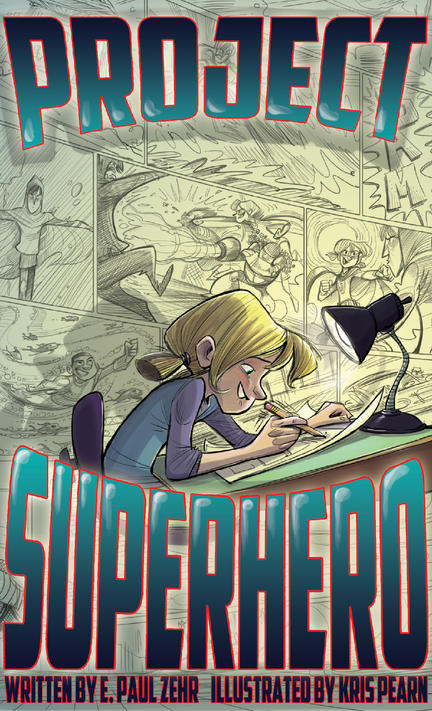 Join 13-year-old Jessie as she keeps a diary of her class’s yearlong research project on superheroes, which culminates in the Superhero Slam: a head-to-head debate battle! It’s shy, comics-obsessed Jessie’s dream come true . . . and worst nightmare. She decides to champion Batgirl, a regular person (albeit with major talent and training under her utility belt), and soon Jessie wonders what it would take to be Batgirl. Will she prove to her best friends, Cade and Audrey, that she’s more than a sidekick? Can she take down archenemy Dylan at the Slam?

Combining science facts, lively illustrations, and comic-book trivia with actual correspondence from superhumans such as NYPD Sergeant Mike Bruen, Olympian Clara Hughes, and Captain Marvel writer Kelly Sue DeConnick, Project Superhero is a celebration of the heroes among us and of one girl’s super-secret identity: herself.

E. Paul Zehr, a professor at the University of Victoria, is the author of Becoming Batman (2008) and Inventing Iron Man (2011) and he writes for Psychology Today, Scientific American, and Discover. He lives in Victoria, BC.
Kris Pearn, veteran animator from Cloudy with a Chance of Meatballs, Arthur Christmas, and Surf's Up, co-directed 2013’s Cloudy with a Chance of Meatballs 2.

“Jessi is an engaging protagonist, and learning more about girls and women in comics is a welcome contribution to the genre.” — School Library Journal

“Pearn’s commercial comics illustration style, with wide-eyed characters and plenty of motion, is perfectly suited to the subject matter, which . . . will appeal to hardcore superhero fans normally leery of any reading material that isn’t segmented into panels.” — Quill & Quire

"The interviews are compelling . . . the science is appealing . . . and the multiple approaches give this multiple audiences. Comic book fans, science geeks, history buffs, and fans of realistic fiction may all find a piece of this to enjoy, and Jessie's cheerful narration is enjoyable throughout." — The Bulletin of the Center for Children's Books

“We need positive influences for girls. Super proud to be a part of Project Superhero, providing exactly this.” — Olympian Clara Hughes

Other titles by Paul Zehr

How Advances in Science, Engineering, and Biotechnology Will Produce a Superhuman

Other titles by Kris Pearn