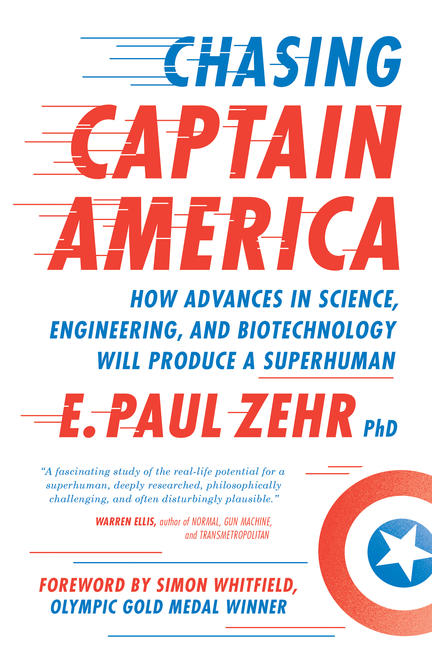 Could we create a real-life superhero by changing human biology itself?

The form and function of the human body, once entirely delimited by nature, are now fluid concepts thanks to recent advances in biomedical science and engineering. Professor, author, and comic book enthusiast E. Paul Zehr uses Marvel’s Captain America — an ordinary man turned into an extraordinary hero, thanks to a military science experiment — as an entry-point to this brave new world of science, no longer limited to the realm of fiction. With our ever-expanding scientific and technological prowess, human biological adaptability is now in our fallible human hands. Thanks to the convergence of biology, engineering, and technology, we can now alter our abilities through surgery, pharmaceutical enhancement, technological fusion, and genetic engineering.

Written in an accessible manner, Chasing Captain America explores these areas and more, asking what the real limits of being human are, how far we should bend those limits, and how we may be forced to reshape human biology if we are to colonize planets like Mars.

Simon Says Gold includes Simon Whitfield's instructions on training—his advice is bound to surprise young athletes in any sport—and includes stories about family, friends, coaches, teachers and mentors—all those who have had a lasting impact on his life and helped make him a champion. Simon lives in Victoria, British Columbia. For more information, visit www.simonwhitfield.com.

“With Chasing Captain America, E. Paul Zehr once again takes the reader on a tour of cutting-edge science while exploring an iconic superhero, this time Steve Rogers, the Sentinel of Liberty. Zehr writes with the expertise of a practicing scientist, the clarity of an experienced teacher, and the unabashed enthusiasm of a comic book fan, resulting in a book that's a joy to read and mindblowing in its scope and detail. Chasing Captain America is a must-read if you're a science nerd, comics geek, or both.” — Mark D. White, author of The Virtues of Captain America and chair of the Department of Philosophy at the College of Staten Island/CUNY

“Chasing Captain America is an exhilarating and illuminating romp through the wild frontiers of real science that until recently only existed in the pages of comic books.” — Daniel H. Wilson, bestselling author of Robopocalypse

“A fantastic, futuristic venture into ‘accelerated human evolution,’ blending well-researched science with fiction and popular culture. You will not put this clever, witty, entertaining, and scary read down once you start and will forever look at progress in our world with different eyes.” — Wolfram Tetzlaff, MD, PhD, Professor, Zoology & Surgery, Director of ICORD, University of British Columbia

Other titles by Paul Zehr

Other titles by Simon Whitfield