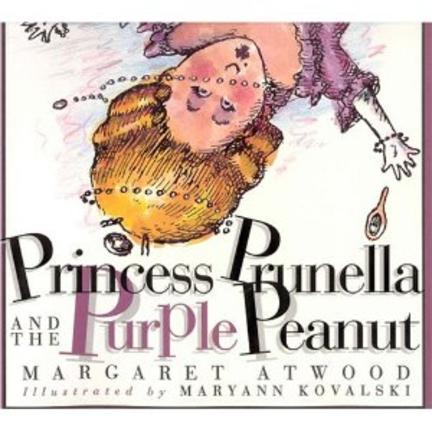 The pampered Princess Prunella has an important life-lesson to learn, and a wise old woman is just the person to teach her! When the old lady comes to the palace begging for food and the spoiled princess rudely shoos her away, the old woman casts a strange and terrible spell. Now the princess is aghast to discover a hideous purple peanut is growing from the point of her nose! The only way for Princess Prunella to break the spell is for her to perform three good deeds. Margaret Atwood's Princess Prunella and the Purple Peanut is a charming children's book with spirited illustrations by Maryann Kovalski.

In her latest book with Orca,Queen Nadine, Maryann Kovalski has once again blended the unique voice and warm-and-bouncy artwork that has made her a favorite across the country. She has illustrated over twenty titles, six of which she also wrote. Her touching Brenda and Edward has become a Canadian classic and her illustrations for The Big Storm by Rhea Tregebov earned her a Governer General's Award nomination. Best-selling collaborations include Mable Murple with Sheree Fitch and Princess Prunella and the Purple Peanut with Margeret Atwood.

Other titles by Maryann Kovalski

Who Is Your Favorite Monster, Mama?

Take Me Out To The Ballgame

The Cake That Mack Ate

Alice and the Birthday Giant