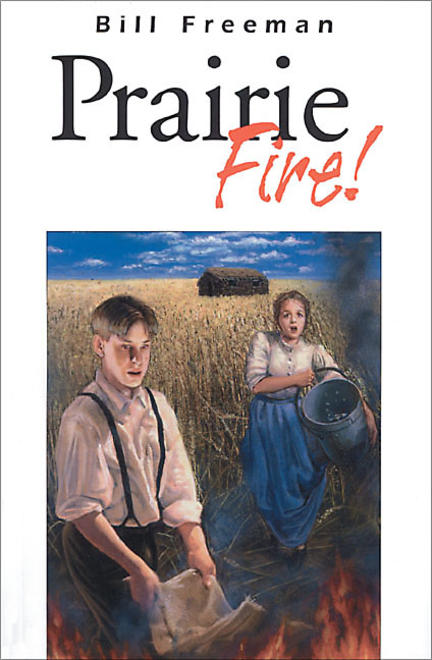 The Bains family are amazed at what they find when they take up their homestead in Portage La Prairie, Manitoba: flash fires that appear suddenly and rage across the open plain, tensions between English settlers and their Métis neighbours that threaten to become just as violent.
At the same time they're filled with hope. Canada in the 1870s is suffering a terrible Depression, and life at their home in Ottawa had become unbearable. The promise of free land in the West beckoned them like an incredible dream. But the realities of building a farm and a home out of nothing are harsh: they have to learn from scratch how to plough, plant, build a house. And the human hatreds that grow in the prairie soil threaten to overcome them all.
Set against the grim realities of homesteading in the Canadian West, Prairie Fire is the story of one family who struggle to adapt to harsh new circumstances. The book is illustrated with a section of photos chronicling this exciting, difficult period in the country's history.
This is the seventh book in the Bains series of historical novels, well-researched, action-filled narratives following the travels of one family across Canadafrom Newfoundland to Alberta in search of a better life during the hard times of the 1870s.

Bill Freeman is an award-winning author who has written historical fiction for young adults, film scripts, documentaries, theatrical plays, educational videos, and non-fiction books. He specializes in writing about Canada and the Canadian experience.

In the 1960s and '70s Bill lived, worked, and studied in Hamilton. The play Glory Days is part of his exploration of the life of the city and its fascinating history. Bill is perhaps best known as the author of novels for young adults set in Canada in the latter part of the nineteenth century called the Bains Series. He is also well known for his books of popular history. His most recent work, Hamilton: A Peopleâ??s History, surveys the cityâ??s often turbulent history. Many of his books have received high critical acclaim and a number of awards. In recent years Bill has worked in the film industry as a writer and historical consultant. He has been on the creative team of many film projects as writer, narrator, and consultant. The projects include a science series for high school students and Mighty Machines II, a made-for-television project for preschool children. Bill Freeman lives on Toronto Island with his partner Paulette.

Other titles by Bill Freeman

Politics and Participation in Canada

The Mafia, the Media and the Party Machine

The Greater Toronto and Hamilton Area

A Play and History of the '46 Stelco Strike

Ambush in the Foothills

Toronto Island and Its People