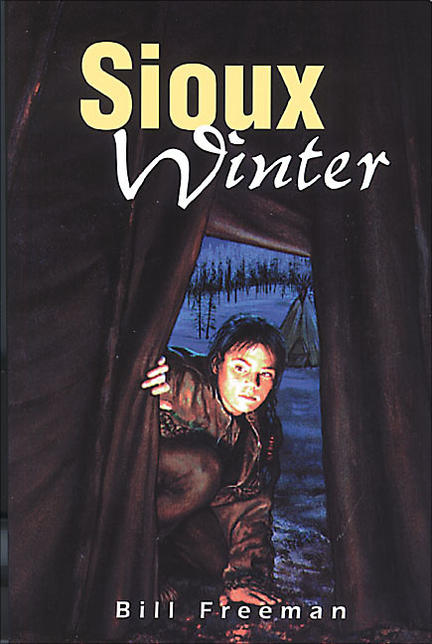 "My mother is held as a prisoner by the Sioux," Black Eagle said, looking directly at Jamie. "Will you come with me to rescue her?" So Jamie and Kate Bains are summoned on a dangerous mission to help their friend, Black Eagle.
His mother Spotted Bird is being held captive deep in Montana Territory and, unless they find her and set her free, Black Eagle may never see his mother again. To reach their destination, the three friends must travel hundreds of miles across unfamiliar prairie, battle blizzards, the U.S. Army and bands of Sioux warriors, who are the sworn enemies of Black Eagle and the Assiniboine. The obstacles they must overcome are great, but both the Bains and Black Eagle are used to adversity and determined to overcome it.
Set against the harsh landscape of the Canadian and U.S. West, Sioux Winter is the story of three friends who fight to overcome great odds and keep a family together. The book is illustrated with photos chronicling this exciting period in Canadian history.
This is the eighth book in the Bains series of historical novels, well-researched, action-filled narratives following the travels of one family across Canada--from Newfoundland to Alberta-- in search of a better life during the hard times of the 1870s.

Bill Freeman is an award-winning author who has written historical fiction for young adults, film scripts, documentaries, theatrical plays, educational videos, and non-fiction books. He specializes in writing about Canada and the Canadian experience.

In the 1960s and '70s Bill lived, worked, and studied in Hamilton. The play Glory Days is part of his exploration of the life of the city and its fascinating history. Bill is perhaps best known as the author of novels for young adults set in Canada in the latter part of the nineteenth century called the Bains Series. He is also well known for his books of popular history. His most recent work, Hamilton: A Peopleâ??s History, surveys the cityâ??s often turbulent history. Many of his books have received high critical acclaim and a number of awards. In recent years Bill has worked in the film industry as a writer and historical consultant. He has been on the creative team of many film projects as writer, narrator, and consultant. The projects include a science series for high school students and Mighty Machines II, a made-for-television project for preschool children. Bill Freeman lives on Toronto Island with his partner Paulette.

"The latest entry in author Bill Freeman's Bains Series, Sioux Winter is an exciting tale of survival. Its strength, however, lies in Freeman's vivid portrayal of the sufferings of the Assiniboine following the influx of white settlers. Sioux Winter would make an excellent accompaniment to a visit to Head-Smashed-In Buffalo Jump Interpretive Centre."

"Throughout the trek, Freeman exposes the true mettle of each of these characters and the reader empathises with each one's fears, tenacity, and fortitude. The development of these characters provide the novel with an authenticity that is necessary for good historic fiction. The factual information about that period of history also supplies the novel with credibility. This is a superb novel to generate a resource unit or a thematic literature unit on North American Native peoples and/or the settlement of the North American prairies. The knowledge that I gained from this novel was phenomenal and I am confident that students will be motivated to investigate more of our history subsequent to reading Sioux Winter. I highly recommend this novel."

"The novel is fast-paced and written in clear language appropriate for readers in the age range given. The characters are multi-dimensional, and their development throughout the story is very believable. The inclusion of actual photographs from such places as the National Archives of Canada, the Saskatchewan Archives Board and the Montana Historical Society provides readers with a real sense of the land and the people and supports the plot. Recommended."

Other titles by Bill Freeman

Politics and Participation in Canada

The Mafia, the Media and the Party Machine

The Greater Toronto and Hamilton Area

A Play and History of the '46 Stelco Strike

Ambush in the Foothills

Toronto Island and Its People