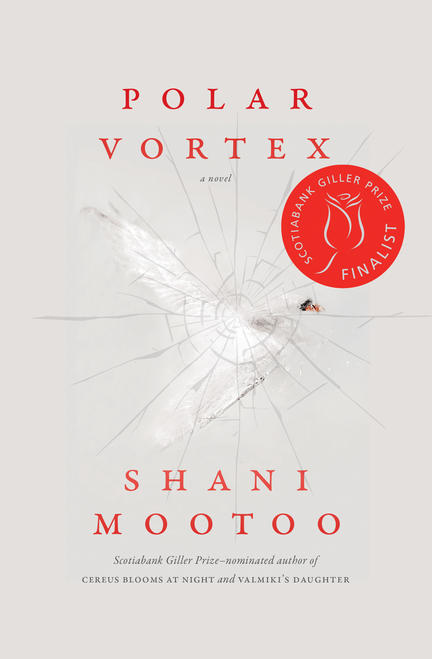 Finalist for the 2020 Scotiabank Giller Prize

Priya and Alexandra have moved from the city to a picturesque countryside town. What Alex doesn't know is that in moving, Priya is running from her past—from a fraught relationship with an old friend, Prakash, who pursued her for many years, both online and off. Time has passed, however, and Priya, confident that her ties to Prakash have been successfully severed, decides it’s once more safe to establish an online presence. In no time, Prakash discovers Priya online and contacts her. Impulsively, inexplicably, Priya invites him to visit her and Alex in the country, without ever having come clean with Alex about their relationship—or its tumultuous end. Prakash's sudden arrival at their home reveals cracks in Priya and Alex's relationship and brings into question Priya's true intentions.

Seductive and tension-filled, Polar Vortex is a story of secrets, deceptions, and revenge. It asks readers: Are we ever free from our pasts? Do we deserve to be?

"A keen meditation on the complexities of identity and desire, Polar Vortex is the unsettling examination of a failing marriage. In a small, southern Ontario town, Priya impulsively invites an old suitor, Prakash, to spend the night and his arrival triggers the fault lines in her relationship with Alexandra. Conflicting wants and untold truths drag the past into the present. Memories cascade and clash as Mootoo masterfully dismantles the stories the narrators tell themselves in language as unsparing as winter."

Shani Mootoo was born in Ireland, grew up in Trinidad, and lives in Canada. She holds an MA in English from the University of Guelph, writes fiction and poetry, and is a visual artist whose work has been exhibited locally and internationally. Mootoo's critically acclaimed novels include Polar Vortex, Moving Forward Sideways Like a Crab, Valmiki's Daughter, He Drown She in the Sea, and Cereus Blooms at Night. She is a recipient of the K.M. Hunter Arts Award, a Chalmers Fellowship Award, and the James Duggins Outstanding Midcareer Novelist Award. Her poetry has appeared in numerous journals and anthologies, and includes the collection, The Predicament of Or. In 2021 Mootoo was awarded an honorary Doctorate of Letters from Western University. Her work has been long- and shortlisted for the Scotiabank Giller Prize, the Dublin IMPAC Award, and the Booker Prize. She lives in Prince Edward County, Ontario.

"Mootoo’s subtle, thought-provoking tale stands out among stories of characters gripped by the past." —Publishers Weekly

"Polar Vortex becomes a book about truth and memory, about how little we know each other, and ourselves. Strange, ominous, haunting, it’s a propulsive read and a deliciously unsettling one." —Pickle Me This

"Polar Vortex is an unsettling novel about how secrets always come back to get us – especially the secrets we’ve managed to keep from ourselves." —The Globe and Mail

"Polar Vortex makes no compromises in conveying the grip of the past on its heady and sensuous cast of characters, all of whom sing their song, as if they were the frozen swans of Lake Ontario that Priya and Alex encounter thawing out after the polar vortex has finally passed." —Quill and Quire

"Shani Mootoo’s Polar Vortex is a powerful, fraught, and inventive exploration of the impossibility of ever really knowing the people we come to love. Told in urgent, incandescent prose and effortlessly spinning in and out of time, the book is an intimate and starkly honest examination of the complexities of sexual identity, lust, shame, regret, and how we, no matter where we come from or how we identify, are at our most complicated when it comes to the whims and failings of the human heart." —Joe Meno, author of Marvel and a Wonder

"Polar Vortex is a completely delicious work by a beautiful writer. It is a perceptive examination of love, desire and the need we each have to love, and have another love us, completely for all our faults and foibles." —Parry Sound North Star

"Beautifully crafted, with perfect form and icy-clear tone—Shani Mootoo held me under her spell until the shock and release of the last page!" —Sarah Selecky, author of Radiant Shimmering Light

"The writing is subtle and emotionally compelling, and the reader is left to meditate on questions of the intersections of race and culture, sexuality and desire, and the past and present." —Canadian Literature

"Polar Vortex haunted me for days as have Mootoo’s other novels. Here is a writer at the full height of her power asking vital, important questions rendered beautifully through character, setting, and plot. Here is a writer demonstrating with passion and power the importance of art to understanding the world. What pleasure!" —Lambda Literary

"The past isn't even past—and the present is tense with conflicting desires and untold stories. What brings clarity to this setting is Shani Mootoo's limpid prose, clean and bracing. Polar Vortex is an honest, but also moving, exploration of true intimacy." —Amitava Kumar, author of Immigrant, Montana

"How to know the shifting pieces of ourselves, how to acknowledge contradictory desires, as we are pulled into the maelstrom of desire and memory? Shani Mootoo's intimate new novel suspends us in the vortex between acts of betrayal and acts of love. It is a powerfully unsettling work from a brilliant artist." —Madeleine Thien, Scotiabank Giller Prize winning author of Do Not Say We Have Nothing

"The heart of the story in Polar Vortex spirals around our efforts to construct and reconstruct the truth, to build and rebuild our selves, to create and sustain meaningful connections in our lives." —Buried in Print

"Shani Mootoo has done it again. She has proven that not only is she a consummate writer but that she is also a keen observer of the human psyche. She is also one of the most honest and self-aware writers that one can have the privilege of reading." —Herizons

"The emotional chill and chilling truths revealed in Shani Mootoo’s latest novel, Polar Vortex, are delivered with late at night, eyes-burning, can’t put down this book feels." —The Miramichi Reader

"Compellingly charts the complexity of human relationships, the illusions of memory, and the corrosive power of denial." —Kirkus Reviews

"In merging a novel about refugees with a novel about decades of relationship tension, Mootoo has created something special that, much like its namesake, merges identity, friendship, sexuality, love, culture, race, and desire. Far from leaving readers chilled, Mootoo’s vortex will drive them on their own desperate searches through memory." ★★★★★ —Shrapnel Magazine

"Closure can not always be found in confrontation, or with sitting in the pain, or with a long overdue argument. Polar Vortex reminds us that sometimes healing is found by simply letting go." —Open Book

Other titles by Shani Mootoo

He Drown She in the Sea

A novel that's gorgeously wrought and excruciatingly (in the best way!) unputdownable.