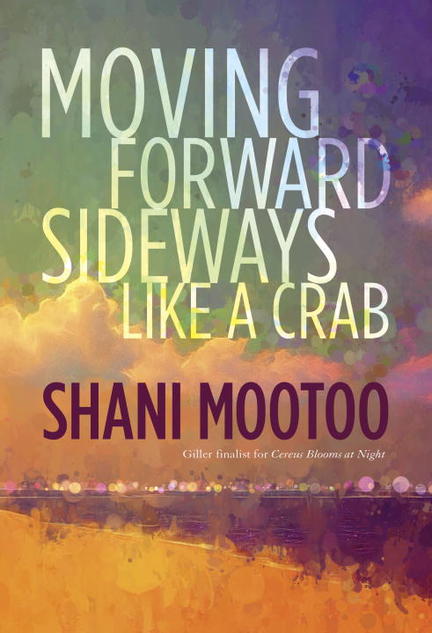 LONGLISTED 2014 – Scotiabank Giller Prize
From the author of Cereus Blooms at Night and Valmiki’s Daughter, both nominated for the Scotiabank Giller Prize, comes a haunting and courageous new novel. Written in vibrant, supple prose that vividly conjures both the tropical landscape of Trinidad and the muted winter cityscape of Toronto, Moving Forward Sideways Like a Crab is a passionate eulogy to a beloved parent, and a nuanced, moving tale about the struggle to embrace the complex realities of love and family ties.

Jonathan Lewis-Adey was nine when his parents, who were raising him in a tree-lined Toronto neighbourhood, separated and his mother, Sid, vanished from his life. It was not until he was a grown man, and a promising writer with two books to his name, that Jonathan finally reconnected with his beloved parent—only to find, to his shock and dismay, that the woman he’d known as “Sid” had morphed into an elegant, courtly man named Sydney. In the decade following this discovery, Jonathan made regular pilgrimages from Toronto to visit Sydney, who now lived quietly in a well-appointed retreat in his native Trinidad. And on each visit, Jonathan struggled to overcome his confusion and anger at the choices Sydney had made, trying with increasing desperation to rediscover the parent he’d once adored inside this familiar stranger.

As the novel opens, Jonathan has been summoned urgently to Trinidad where Sydney, now aged and dying, seems at last to offer him the gift he longs for: a winding story that moves forward sideways as it slowly peels away the layers of Sydney’s life. But soon it becomes clear that when and where the story will end is up to Jonathan, and it is he who must decide what to do with Sydney’s haunting legacy of love, loss, and acceptance.

Shani Mootoo was born in Ireland, grew up in Trinidad, and lives in Canada. She holds an MA in English from the University of Guelph, writes fiction and poetry, and is a visual artist whose work has been exhibited locally and internationally. Mootoo's critically acclaimed novels include Polar Vortex, Moving Forward Sideways Like a Crab, Valmiki's Daughter, He Drown She in the Sea, and Cereus Blooms at Night. She is a recipient of the K.M. Hunter Arts Award, a Chalmers Fellowship Award, and the James Duggins Outstanding Midcareer Novelist Award. Her poetry has appeared in numerous journals and anthologies, and includes the collection, The Predicament of Or. In 2021 Mootoo was awarded an honorary Doctorate of Letters from Western University. Her work has been long- and shortlisted for the Scotiabank Giller Prize, the Dublin IMPAC Award, and the Booker Prize. She lives in Prince Edward County, Ontario.

“Moving Forward Sideways Like a Crab moved me deeply. . . .  A brilliant metaphor for how we reexamine and reshape stories about ourselves and others to slowly come to understanding.”
—The Toronto Star
“A writer with a generous spirit and a gift for storytelling.”
—The Globe and Mail
“Mootoo has an impeccable ear … authentic and powerful.”
—The New York Times Book Review

“Mootoo writes of death and loss with an equally heartbreaking poignancy. . . an intensely moving story.”
—Winnipeg Free Press
“Mootoo’s prose is vivid, poetic and passionate ….This is a writer who knows how to satisfy the reader.”
—NOW Magazine (NNNN)
“Mootoo’s sense of narrative verges on genius.”
—Edmonton Journal

“A masterful storyteller.”
—The Washington Post
“Moving Forward has a fascinating premise, one that emboldens Mootoo’s ongoing literary project of giving voice to sexual minorities with brown faces from hot countries. . . . They are stories that can no longer be silenced.”
—The Globe and Mail
“It is a gorgeously written novel, which leaves readers to ponder the stories we are told, how we disguise our true selves and eventually need to tell our own story.”
—The StarPhoenix
“Shani Mootoo’s multilayered new novel explores storytelling and traces powerful transitions between cultures and genders. . . . [it] encompasses identity, dislocation, and storytelling’s capacity to navigate grief and lapsed time.”
—Georgia Straight

Other titles by Shani Mootoo

He Drown She in the Sea

All the best literary picks for the armchair traveller.