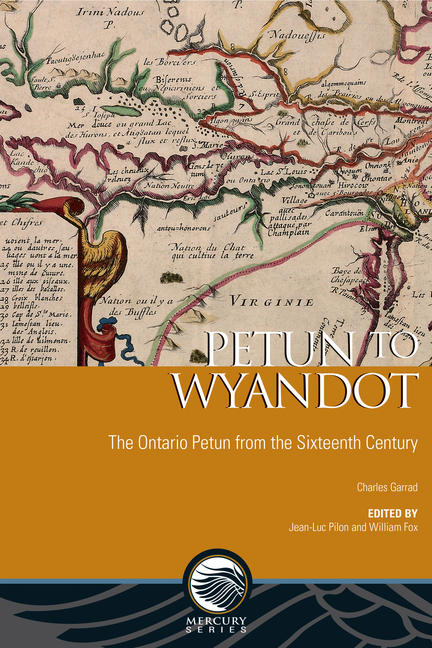 Charles Garrad’s unique work resurrects the memory of the Petun and traces their route from their creation myth to their living descendants scattered from southwestern Ontario to Kansas and Oklahoma. In Petun to Wyandot, Charles Garrad draws upon five decades of research to tell the turbulent history of the Wyandot tribe, the First Nation once known as the Petun. Combining and reconciling primary historical sources, archaeological data and anthropological evidence, Garrad has produced the most comprehensive study of the Petun Confederacy. Beginning with their first encounters with French explorer Samuel de Champlain in 1616 and extending to their decline and eventual dispersal, this book offers an account of this people from their own perspective and through the voices of the nations, tribes and individuals that surrounded them. Through a cross-reference of views, including historical testimony from Jesuits, European explorers and fur traders, as well as neighboring tribes and nations, Petun to Wyandot uncovers the Petun way of life by examining their culture, politics, trading arrangements and legends. Perhaps most valuable of all, it provides detailed archaeological evidence from the years of research undertaken by Garrad and his colleagues in the Petun Country, located in the Blue Mountains of Central Ontario. Along the way, the author meticulously chronicles the work of other historians and examines their theories regarding the Petun's enigmatic life story.
Published in English.

Charles Garrad’s dedication to understanding the Petun began in the late 1950s when he was shown an archaeological site near Craigleith, in Ontario’s Blue Mountains. As the study of the Petun became his life project, Garrad came to be recognized as an authority on the subject. Over the years, he undertook countless excavations and published widely on the matter.

Jean-Luc Pilon is Curator of Ontario Archaeology at the Canadian Museum of Civilization and an adjunct professor in the Department of Sociology and Anthropology at Carleton University.

"What he has achieved is really very extraordinary," he said. "He has published and written extensively on the Petun...This 628-page book is a distillation of that. It is a lifetime of work. It is his attempt to put what is between his two ears into a book. In archaeology it is rare for people to do that." – Erika Engel, Blue Mountains Courier Herald, 2014

“It’s been a long long journey to bring this book into being, said Garrad joking that archaeological talks and archaeological books are exceedingly boring before launching into a story that began in France in the mid-1500s. It was Champlain who found a series of well-built villages belonging to an agricultural and trading people in 1616 .He named them Nation de Petun Tobacco Nation a people who had broken away from the Huron Nation and moved into the area around Craigleith to participate in the fur trade.” – Sun Times, 2014, p. A03

Other titles by Charles Garrad

Other titles by Jean-Luc Pilon

Masterworks from the Canadian Museum of Civilization

Painting the Past with a Broad Brush

A Passion for the Past

Other titles by William Fox