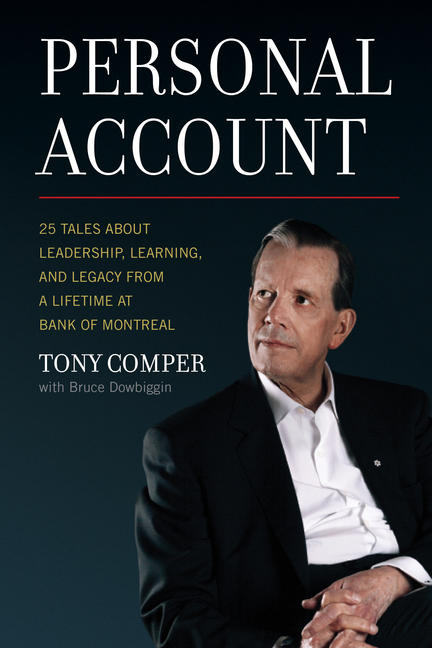 After nearly four decades at Bank of Montreal, former President and CEO Tony Comper shares leadership lessons from his experience at the helm of one of the world’s largest financial institutions.

Anthony “Tony” Comper likes to say that he can sum up his remarkable career in Canadian banking in 25 stories. In a business often filled with big personalities and memorable characters, Tony’s motto is Festina Lente — make haste slowly.

In Personal Account: 25 Tales about Leadership, Learning, and Legacy from a Lifetime at Bank of Montreal, Comper chronicles how he guided the bank’s software evolution on real-time banking and the introduction of ABMs. He also saw BMO evolve from traditional lender to facilitator in the market, partnering with businesses to create a more vibrant source of capital. That innovation included Tony’s role in integrating women and new Canadians into BMO while fighting anti-Semitism in the community. He was also critical in creating new banking models for the Indigenous community.

A first-person analysis of the major transitions in his almost four decades at the bank. A memoir of turbulent, challenging times. An examination of surviving the most severe financial shocks without jeopardizing the nation’s financial stability.

Personal Account is equal parts warm memoir, teaching lesson, and a reminder of the value of legacy.

BRUCE DOWBIGGIN is a critically acclaimed sports journalist whose many award-winning works include Money Players: How Hockey’s Greatest Stars Beat the NHL at Its Own Game, Of Ice and Men and The Stick: A History, A Celebration, an Elegy. His work in radio and television has twice won him the Gemini Award for excellence in sports broadcasting.

“I have known and respected Tony Comper as a fellow banker and, for ten years, a fellow corporate board member. This book is an extraordinarily insightful view of not only his accomplished career, but a rare look into important issues and decisions facing the CEO of one of North America’s largest financial services companies.” — Austin Adams, Corporate Director and retired JPMorgan Chase & Co. CIO

“As an executive of another bank, I found many parallels with the various challenges Comper faced over his career. The ‘Merger That Never Was’ and the management challenges that followed make for some particularly interesting reading.” — Robert Chisholm, retired Scotiabank vice-chairman

“Are bankers boring? Men and women in suits crunching numbers and talking high finance? Most of us have thought so. Until you start realizing the full impact their smallest decisions have on our lives. Tony Comper has been there and done that for almost half a century from the highest levels of Canadian banking — and now he gives us the inside story in a unique style. He uses ‘moments’ as bite-sized teaching experiences all of us can use. Not boring at all.” — Peter Mansbridge, broadcaster and author

“This is not a memoir you would generally expect from a banker. The title of the book — Personal Account — describes the road he followed in his career path and reflects his personal perspective from an environment rich with opportunities for readers to learn from. I highly recommend taking that trip with him.” — Policy Magazine

Other titles by Bruce Dowbiggin

The Six Most Compelling Draft Years in NHL History

The Story of a Hockey Legend

The Rise and Fall of the Greatest Vancouver Canucks Team Ever

The Meaning of Puck

How Hockey's Greatest Stars Beat the NHL At It's Own Game