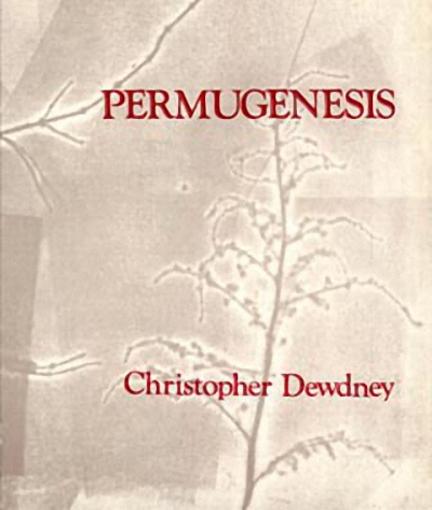 Review by a reader from Betesda, MD posted at www.amazon.com:

Dewdney's Permugenesis is both an extension and a reworking of the first two sections of his long poem, "A Natural History of Southwestern Ontario." Phrases from the first two books ("Spring Trances in the Control Emerald Night" and "The Cenozoic Asylum") are repeated, though often in mutated form, and get a chance to mate with and breed all sorts of interesting new sentences. Dewdney's prose poems are dreamlike, often hallucinogenic - one often feels he's speaking his own language. If John Ashbery and Annie Dillard had a child - well, I'm not sure that he'd write like Dewdney; but I'm pretty sure the two of them would get along.

Christopher Dewdney has served as writer-in-residence at Trent, Western, and York universities. Featured in Ron Mann’s film Poetry in Motion with William Burroughs, Allen Ginsberg, Michael Ondaatje, and Tom Waits, Dewdney has presented his groundbreaking poetics across North America and Europe. He also creates acoustic and visual art, along with incisive arts commentary for print, radio, and television.

Karl E. Jirgens, head of the Department of English at the University of Windsor, has taught at the universities of Toronto, York, Guelph, and Laurentian. Since 1979, he has served as editor-in-chief of Rampike, a critically acclaimed international journal of art and writing. Jirgens’s fiction, performance works, poetry, and scholarly articles are published worldwide.

Other titles by Christopher Dewdney

The Epic Drama of Our Atmosphere and Its Weather

The Soul Of The World

Unlocking the Secrets of Time

Acquainted With The Night

Excursions Through the World After Dark

Children of the Outer Dark

The Poetry of Christopher Dewdney