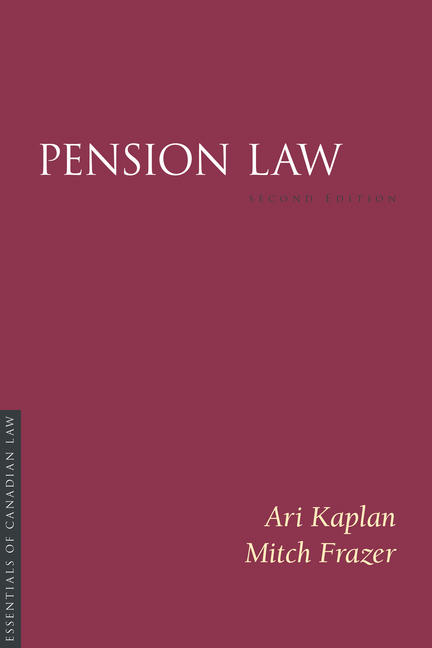 The second edition brings pension law up to date with consideration of recent cases such as Re Indalex, in which the Supreme Court of Canada examined how to allocate the risks of an employer’s insolvency among its creditors. This edition tracks the shift of the law of trusts within pension jurisprudence from “classic” trusts to “modern” trusts; the reform of minimum pension standards; new plan design legislation being offered to respond to decreasing pension plan coverage among the Canadian workforce; the development of target benefit plans; and innovative plan designs such as New Brunswick’s new “shared risk” plan model.

The book will be an invaluable resource for anyone who needs to understand this complex legal and regulatory environment including lawyers, human resources officers, plan administrators and trustees, actuaries, accountants, public servants, and union officials.

Ari Kaplan is principal of Kaplan Law, Canada’s first law firm specializing in pensions and benefits dispute resolution. He authored the first edition of Pension Law, which won the 2007 Walter Owen Book Prize for outstanding new contribution to Canadian legal literature. He is Canada’s first Qualified Mediator with expertise in pension and benefits law. He is a past assistant professor at Western University; past adjunct professor at the University of Toronto; past appointee of the Attorney General to the Board of Trustees of the Law Foundation of Ontario; and past chair of the Ontario Bar Association, Pension & Benefits Section. He is a member of the Law Society of Ontario, ADR Institute of Canada and a founding member of the Family Dispute Resolution Institute of Ontario. He practices mindfulness meditation and teaches these skills to lawyers and others. BA (Hons), McGill (1994); LLB, Osgoode (1997), LLM, Osgoode (2001); QMed, ADRIC (2015).

Mitch Frazer is a partner and the chair of the Pensions and Employment Practice at Torys LLP. His practice focuses on all aspects of pensions, benefits, employment, and executive compensation. He is an adjunct professor at the University of Toronto Faculty of Law and a former adjunct professor at Osgoode Hall Law School of York University. He is the author of A Practical Guide to Private Pension Plans in Canada (2012), publishes and speaks regularly on pension, benefits, employment, and executive compensation issues, and has been interviewed on television, on radio, and in print.

Mitch is also an advocate for educational causes. He is a member of Ryerson University’s Board of Governors and a member of the Toronto French School Board of Directors, and a former member of the Board of Trustees of the Ontario Science Centre.

Other titles by Ari Kaplan

Other titles by Mitch Frazer