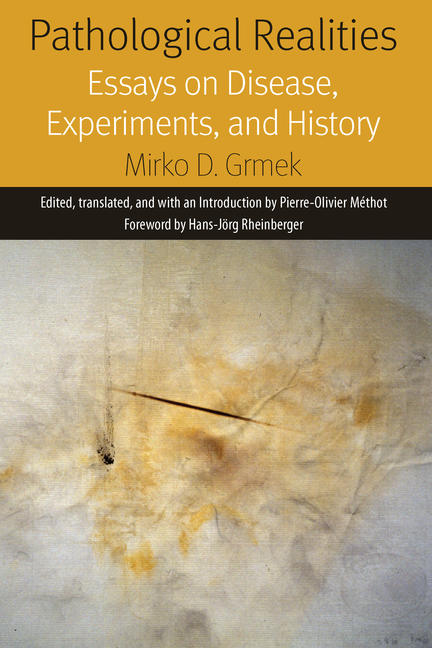 Mirko D. Grmek (1924-2000) is one of the most significant figures in the history of medicine, and has long been considered a pioneer of the field. The singular trajectory that took Grmek from Yugoslavia to the academic culture of post-war France placed him at the crossroads of different intellectual trends and made him an influential figure during the second half of the twentieth century. Yet, scholars have rarely attempted to articulate his distinctive vision of the history of science and medicine with all its tensions, contradictions, and ambiguities. This volume brings together and publishes for the first time in English a range of Grmek’s writings, providing a portrait of his entire career as a historian of science and an engaged intellectual figure. Pathological Realities pieces together Grmek’s scholarship that reveals the interconnections of diseases, societies, and medical theories.
Straddling the sciences and the humanities, Grmek crafted significant new concepts and methods to engage with contemporary social problems such as wars, genocides and pandemics. Uniting some major strands of his published work that are still dispersed or simply unknown, this volume covers the deep epistemological changes in historical conceptions of disease as well as major advances within the life sciences and their historiography. Opening with a classic essay – “Preliminaries for a Historical Study of Diseases,” this volume introduces Grmek’s notions of “pathocenosis” and “emerging infections,” illustrating them with historical and contemporary cases. Pathological Realities also showcases Grmek’s pioneering approach to the history of science and medicine using laboratory notebooks as well as his original work on biological thought and the role of ideologies and myths in the history of science. The essays assembled here reveal Grmek’s significant influence and continued relevance for current research in the history of medicine and biology, medical humanities, science studies, and the philosophy of science.

Pierre-Olivier Méthot is Associate Professor of Philosophy at Université Laval.

Hans-Jörg Rheinberger is Director of the Max Planck Institute for the History of Science, Berlin, and the author of Toward a History of Epistemic Things.

This important interdisciplinary work crosses national, cultural, linguistic, and disciplinary borders to make a
positive contribution to the fields of history of medicine and biology, medical humanities, science studies,
philosophy of science, and philology... High recommended.

A medical doctor by training, [Grmek] opened a new chapter in the history of medicine. Instead of focusing on illnesses as a human condition and the historically changing means of their conceptualization and remediation, he paved the way for looking at diseases as historical agents, both in their interactions with each other and their impacts on the course of human culture, be it plague in the Middle Ages or AIDS more recently. . . He was a paragon of crossing boundaries: national, cultural, linguistic, as well as disciplinary borders.---Hans-Jörg Rheinberger, from the foreword,