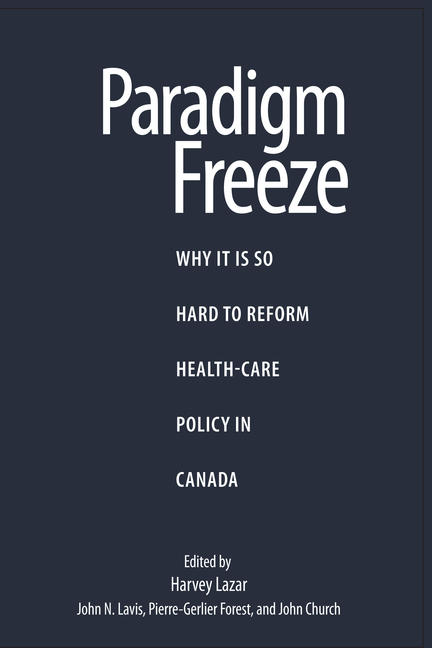 Why has health care reform proved a stumbling block for provincial governments across Canada? What efforts have been made to improve a struggling system, and how have they succeeded or failed? In Paradigm Freeze, experts in the field answer these fundamental questions by examining and comparing six essential policy issues - regionalization, needs-based funding, alternative payment plans, privatization, waiting lists, and prescription drug coverage - in five provinces. Noting hundreds of recommendations from dozens of reports commissioned by provincial governments over the last quarter century - the great majority to little or no avail - the book focuses on careful diagnosis, rather than unplanned treatment, of the problem. Paradigm Freeze is based on thirty case studies of policy reform in Alberta, Saskatchewan, Ontario, Quebec, and Newfoundland and Labrador. The contributors assess the nature and extent of healthcare reform in Canada since the beginning of the 1990s. They account for the generally limited extent of reform that has occurred, and identify the factors associated with the relatively few cases of large reform.

An insightful new perspective on a problem that has plagued Canadian governments for decades, Paradigm Freeze is an important addition to the field of health policy.

Harvey Lazar is adjunct professor in the School of Public Administration at the University of Victoria and a fellow at the Institute of Intergovernmental Relations at Queen's University.

Pierre-Gerlier Forest is an associate professor in the Department of Political Science at Université Laval.

John Church is an associate professor in the Department of Political Science at the University of Alberta.

Other titles by Harvey Lazar

Canada: The State of the Federation 2002

Reconsidering the Institutions of Canadian Federalism

The Impact of Global and Regional Integration on Federal Systems

Canada: The State of the Federation 2001

Toward a New Mission Statement for Canadian Fiscal Federation

Canada: The State of the Federation 1997

Other titles by Pierre-Gerlier Forest

The Fiscal Sustainability of Health Care in Canada

The Governance of Health Care in Canada

Other titles by John Church