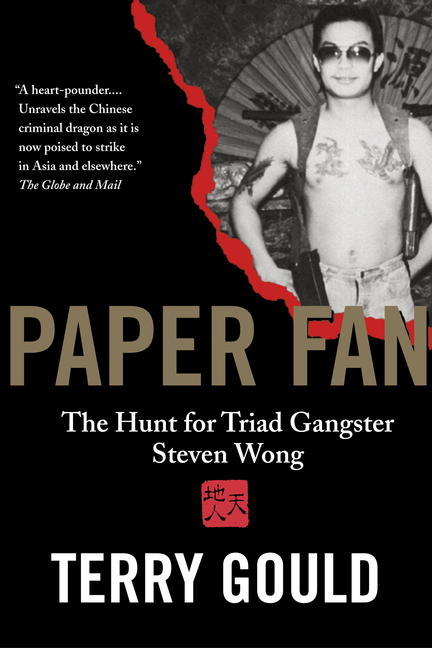 For 11 years terry Gould has tracked the man known as the “paper fan” through the organized crime circles of six countries. This riveting, horrifying, yet often hilariously funny book is the story of that search, a daredevil journey through the seductions and terrors of Steve’s world.

Steven Wong is the “paper fan,” a thirty-nine-year-old Hong Kong-born mobster. Raised in New York’s Chinatown, he matured into crime in Vancouver, where he founded and headed the murderous Gum Wah Gang in the late 1980s and early ’90s. In 1992, Wong “died” in a traffic accident in a remote area of the Philippines before he could be sent to jail for heroin trafficking, conveniently just after he’d taken out a million-dollar life insurance policy. His urn may still be interred in a Vancouver cemetery, but today, Interpol has a “Red Alert” arrest warrant out for Wong, and his updated file reads like a Hollywood action film -- a post-mortem panorama of organized criminal adventure that circles the Pacific Rim, from Macau to Japan, from Cambodia to the Philippines.

Gould’s search takes him into a world in which politicians, police, businessmen and criminals sprint along in one big pack, sometimes nipping each other’s heels, sometimes licking each other’s faces, and sometimes inviting one another back home for all-night mah-jong parties. Forced to work according to right-side-up rules, honest cops haven’t had a chance of arresting Steve in his upside-down world. Four times, Terry Gould has traced Steven Wong through Asia’s circles of corruption and pinned him down, but the law has let him slip away. Fifth time lucky?

“Gangsters are good team players who generally exhibit a locker-room familiarity with other men. Still, it surprised me when Steve answered the door on Monday wearing only his polka-dot boxers, showing off his biceps and his chest tattooed with the winged dragons and sharp-taloned eagle. He was talking on the phone and barely interrupted himself as he turned back into the house, whereupon I realized that the display was likely done on purpose. Neck to waist his back was totally covered by a stylized tableau of a dragon crawling against a background of tigers and flowers — a Triad montage no one outside his syndicate world was supposed to see.” -- from Paper Fan

Chapter 1 — The Garden of Reflection

There is no marker where the Paper Fan’s ashes are buried. The Schlipfs, Kosakas, and Holts are remembered with bronze plaques, but the Triad official has only an empty square of fescue to show for his life. “You’re sure this is his plot?” I ask Kein Battistone, the Forest Lawn Cemetery’s family service counselor.

Kein takes a step forward from where he stands discreetly behind me. Hands behind his back he bows slightly as he says, “Absolutely, Mr. Gould, that’s his plot, I’m positive.” He pulls from his breast pocket a photocopied map, shielding it from the rain with his palm. “Wong, Steven Lik Man. 1992. The Garden of Reflection. Row 2–C, Plot 582.” He kneels and pats the forlorn-looking bare spot. “Steve’s urn is right under here, I can assure you.”

I consult my own map and scan the terrain. Everything is as Chuck “the Chink” Gough drew it after Steve’s death. I’m eight paces east of a pretty copse with a pond in the middle. Orange carp are nuzzling the surface of the black pool and starlings squeal among the maples. Chuck the Chink, who is actually a white man, was part of Steve’s crew at the height of its ride. “I know Steve’s happy in that Garden of Reflection, Terry,” he told me. “He liked the birds and the fish, ya know. Also, the family’s got a great fucking view when they pay respects.”

I orient Chuck’s scrawled word “mountains” against the checkerboard of plaques marching up the hillside to the view, but white clouds hide the Coast Range. It has been warm and sunny for several days leading up to this ninth anniversary of Steve’s death; then, last night, an Aleutian wind blew in, laying down a sad gray shroud over Vancouver.

Kein has turned his eyes to the hidden mountains too, and appears to be thinking of something pleasant. He’s a young goateed fellow, his khaki shirt good-naturedly adorned with a Bugs Bunny tie. He seems like the kind of person I can talk to. “Key-in and Bat-a-stone,” he told me in his office, explaining how to pronounce his name. He’s done me a big favor, leading me through the thousands of graves in the rain to find Steve.

“Is it common when the family buries ashes that they don’t put a marker down?” I ask.

“Is it common?” Kein replies. He massages his goatee in thought. “Well, the marker takes two or three months to make, and then the family usually assesses their financial situation. Sometimes a family says they can’t afford it, and it just gets left there without a marker. There’s lots of different reasons. May I ask how you know Steve?”

I hesitate — a Chinese man in a trench coat has wandered up and is standing 30 feet away, looking down, a bouquet of flowers hanging from his hand. He leans forward and places the flowers on the grass, cups his hands and brings them to his forehead in a pronam. I’d thought about flowers myself, but when it came to paying for them at my local supermarket I broke into laughter. I gave them to my wife instead.

“I’m a journalist,” I tell Kein, when the man has strolled away. “I used to write about Steve — I’m writing about him now. But I’ve never been to his grave site.”

Kein looks at me curiously. “What did he do that you’re writing about him?”

“Ohhh-kay!” Kein nods and narrows his eyes, surveying my pad, camera, and shoulder pack with new understanding. “So I guess he was murdered then, or —”

“There were things that went on.”

“Well, it must be drug-related. We get them allll the time. For us it’s like a common occurrence. That’s a reason there wouldn’t be a marker here. If he did something wrong, or if his death in some way involved criminals, then the family’s leaving it unmarked, because they don’t want the people to know where he is.”

“There you go! That tells me a lot right there. The family doesn’t want anybody to know where he is.”

I ponder Steve’s blank patch, thinking of his parents, brothers, and nephews, not to mention his half a dozen mistresses, one of them married to a billion-dollar gambling racket. “It’s already been nine years,” I say.

“Well then, he must have had some heavyweight people after him. Maybe the family’s waiting a nice round ten years. Enough time for the people who were after him to forget. But then, you obviously haven’t forgotten him,” Kein laughs.

“No, not me,” I say, and snap a picture of the grass, stomped flat by the family of the Schlipfs. “I’ll never forget Steve.”

As we walk back towards the paved path I stop, dig my wallet out and give Kein my card. “Maybe you can let me know if Steve has any visitors.”

Kein tsks his tongue in regret. “I don’t know if I can do that for you. But some inside information I can give you is that we have only three spaces left here. Three hundred and ninety dollars.”

“A deal!? Are you kidding? Whispering Pine is two thousand.” He points across the lawn. “Heartland is five thousand. So for this location, yes, you’ve got a real bargain. In fact, in fact — ” he says, checking his map, “you can have one right here if you want it.”

“Ten steps from Steve,” I say, looking down between my feet. If I could collar him that way, I’d do it in a second.

“A madcap, pulse-quickening race across the far reaches of Asia.... This work is among the most provocative and well-written texts on Asian organized crime that I have read in years.... Politics, history, culture, suspense and copious amounts of good humour — Paper Fan has it all.”
—The Globe and Mail

"Southeast Asia is like this. Asian organized crime -- in Vancouver or Hong Kong -- is like this. Great stories contain such trajectories and great investigative journalists display such compulsions. Paper Fan is unbuttoned and out-sized and wonderfully wild."
—Charles Foran

"Part cop, part journalist, part friend, Gould pursues his prey with the relentless fervour of an Indiana Jones — and takes you along for a fearful yet funny ride through the underworld."
—Julian Sher

"With verve, style and humour Terry Gould leads readers on an unforgettable journey into a ruthless underworld populated by gangsters and one almost mythic, but undeniably ingenious mobster who transcends them all. A remarkable story told by a remarkable storyteller."
—Andrew Mitrovica, author of Covert Entry

Praise for The Lifestyle:

“In this intelligent approach to this taboo subject — without advocating the heterosexual lifestyle or promoting it — Gould explains what has always only been exposed, and thus wildly misunderstood.”
—The Toronto Sun

“Gould has fashioned his extensive research on the phenomenon into a timely, serious, useful book — you can read it tonight and still respect yourself in the morning.”
—Toronto Star

Other titles by Terry Gould

Marked for Death (aka Murder Without Borders)

Dying for the Story in the World’s Most Dangerous Places

Canada's Mission to Train Police in the World's Failing States

Dying for the Story in the World's Most Dangerous Places