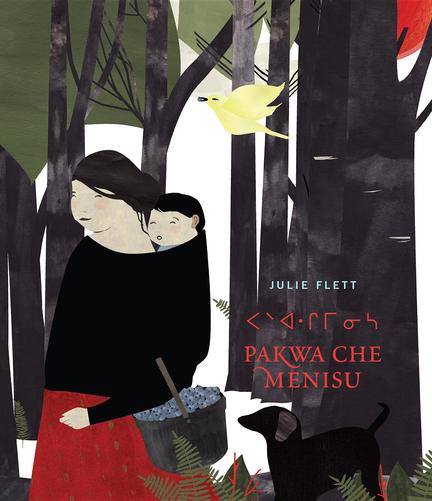 A young boy spends a summer day picking wild blueberries with his grandmother in this beautiful new picture book by award-winning illustrator Julie Flett. Exploring the important tradition of berry-picking, the story is written completely in the Cree language.
This book is set in n-dialect, also known as Swampy Cree from the Cross Lake, Norway House area. A syllabics pronunciation guide is available at the end of this book.
An edition of Wild Berries written in both English & n-dialect Cree from the Cumberland House area is also available, published by Simply Read Books.

Globe & Mail - Susan Perren, Review
It's not always the case that a work of art and a ""teachable moment"" intersect but, most happily, they do in Julie Flett's remarkable Michif/English alphabet book.

Flett, a Métis artist living in Vancouver, introduces her book by noting, “Languages are precious; they capture the very essence of a culture. The exceptional night-sight of owls is akin to the insight that language offers in understanding a culture.”
Once spoken by hundreds of thousands across the Canadian Prairies and the northern United States, Michif, the language of the Métis people, is now endangered. Métis elders in scattered parts of North America may still speak the language, but the young are largely monolingual English speakers. Recently, an awareness that the impending death of Michif will result in the dying out of Métis culture has resulted in a renewed interest in learning the language.
Julie Flett’s alphabet book, an important step in this direction, will be enjoyed by anyone with a burgeoning interest in letters and language.

A is for “Atayookee!” (Tell a story!); B is for “Li Bafloo” (Buffalo); M is for “Mawishow” (He/she is picking berries); V is for “Li Vyalon” (Fiddle) and Z is for “Lii Zyeu” (Eyes).
All the other letters of the English alphabet are present and accounted for here except q and x, for which there are no sounds in Michif. Flett’s choice of object or expression and her illustrations for each give her book a lovely sparkle.

Her two-page paintings accompanying each letter are simple, crisp and elegant and seem to tease out what is essential in, or intrinsic to, for instance, owl, leaf, snow, barley or rain.
This book is shortlisted for the 2010 Governor-General's Award for Children's Literature - Illustration.


TimeOut New York Kids - Picture book pick
""The gorgeous, bilingual ABC book Owls See Clearly at Night: A Michif Alphabet introduces kids—and, likely, parents—to the language and culture of the Métis people of North America. Digitally enhanced silhouettes rely on a simple, striking palette that illustrates words in the Michif language, a combination of native Cree and Salteaux, plus French (a pronunciation guide at the back may or may not help with some of the tongue-twisty vocabulary). A single word may convey an entire sentence (”M” is for “Manishow,” which means “He/she is picking berries”), or be so close to English as to be almost guessable, even without the accompanying picture (”B” is for “Li Bafloo,” or “the buffalo”). If the bilingual format is a bit much for kids just learning the alphabet, poring over the images is its own reward. Look for clever details like a wolf sticking his tongue out to catch “la pwii” (rain), or the bear hiding behind a tree, hoping for a taste of “la galet” (or bannock, a type of flat bread). Field trip idea: Consider pairing a reading with a visit to the a href=""http://newyorkkids.timeout.com/venues/financial-district/6582/national-museum-of-the-american-indian"">National Museum of the American Indian.

""In Owls See Clearly at Night, Julie Flett’s beautiful and elegant illustrations eloquently describe the Michif alphabet. Each letter’s vignette is thought-provoking, depicting elements of the natural world in an illumination of meaning. The letters appear deceptively simple at first glance, but in fact each contains its own mysterious, lyrical story."" - Tough City Writer

Toronto Star
Vancouver’s Julie Flett presents a Michif (the Cree/French/Gaelic language of the prairie Métis) alphabet book in Owls See Clearly at Night (Simply Read, 56 pages, $18.95, ages 3+). Flett’s art of paint, ink and collage — a mixture of traditional and digital —is austere, elegant and highly evocative of the landscape and culture whence it comes. Each letter represents a Métis word and its English translation. A visual and linguistic delight.

Still This Love Goes On

My Heart Fills With Happiness / Nijiikendam